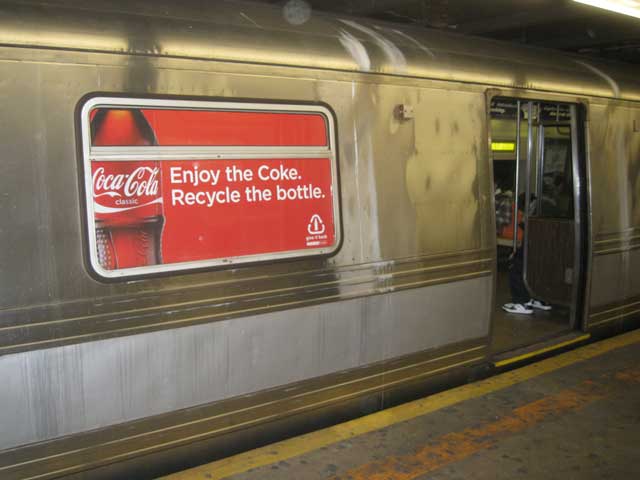 This month there was a strong reaction against the new Coke ads running on the subway windows. The MTA has now spoken up and the organization's Jeremy Soffin tells us that it's merely "a month-long pilot designed to test the effectiveness of this material in discouraging scratchiti. We are evaluating both whether to test this further to fight scratchiti and whether it is a potential source of advertising revenue, although the focus is on the scratchiti at this point."

Perhaps with 3-figure MetroCards in the future, the focus should be on ad revenue? Not so fast, straphanger; Paul Fleuranges of the MTA tells us that "scratched and etched glass is a major vandalism problem, costing us in excess of $2.5 million a year to deal with alone." So eliminating the damage could save us all some dough in the end...it's not like stopping scratchiti artists is free all the time.

Addressing a major safety concern, Soffin added that "You can see through the windows, as verified by the NYPD in approving the pilot" (the NYPD has yet to comment on the matter). The material the ad is printed on is called Scotchcal, a 3M product; essentially it's a perforated window graphic film that allows one to see from the inside-out, but not the outside-in (so basically not at all helpful when you are being attacked in a subway car and no one can see you from the outside). The pilot cost the MTA nothing, "as Coke basically under wrote through its ad buy and CBS Outdoors contributed the labor costs to apply," according to Fleuranges.

For now, there's no word on if the initiative will continue past the pilot—it depends on "how the material holds up, public reaction and whether it has viability should it work as a revenue generator." One bonus they noted was the energy efficient tinted window effect, preventing sun soak from making the cars that run outdoors too hot and overworking the HVAC systems during the summer months.