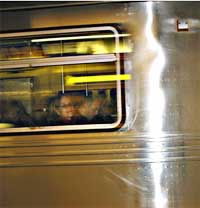 As the MTA considers ways to save money as it faces billion-dollar deficits, the Daily News suggests the "Sick Customer Response Program" could be on the chopping block. Apparently the MTA would be able to save $250,000 if the program, which has EMTs stationed at seven busy stations, were eliminated in 2009, but we think it would be a mistake to end it.

First of all, it would be a PR nightmare, what with passengers questioning whether the MTA and NYC Transit really care about their well-being. Second, sick passengers were the number 3 cause of subway delays last year (many of them fainting women on diets) - if anything, it would be great to have more EMTs.

NYC Transit spokesman Paul Fleuranges tells the News it's "premature" to discuss budget ideas. Hmm - we're hoping that the News article is a way to get the public's dander up about it to rally against nixing the program. You can read a transcript of a Transit Trax talk about the SCRP here. The EMTs are stationed at Queens Plaza and Roosevelt Avenue in Queens and 125th St. (Nos. 4,5,6), Grand Central Station, 5th Ave. & 53rd St., 14th St.& Union Square, and Fulton Street in Manhattan.