Last year, we learned that the MTA was planning to supersede the MetroCard with a new form of "fare payment technology" starting in 2019. Now, we have a lot more information about their plans—starting with the fact that the MetroCard likely won't be phased out until closer to 2022.

Although the MTA believes that the MetroCard remains too expensive to maintain, they have pushed back the roll out of the new system to spend a little more time studying how other cities have installed their own fare payment systems. And in their latest Capital Budget report, they estimate that the total cost to overhauling the system will be around $450 million.

As the MTA previously told us, they wants to switch over to an electronic system that would get rid of the need for separate cards: "It would be a new fare payment system that is based on a form of technology for payment," spokesman Aaron Donovan said, "which is technically known as the RFID or NFC for near-field communication type of payment. It's really common in Europe; you can pay for taxis with it. It hasn't gotten as much traction here but it has overseas."

The idea is to install an E-Z Pass-esque system in the subways: instead of swiping a magnetic MetroCard strip, you would tap a credit card, smartphone or keychain (anything with the particular chip embedded in it) and go straight through.

The MTA will still have unlimited and pay-per-ride plans—this technology wouldn't affect fare prices, in theory—but the physical mechanism at the turnstile would be different. The plus sides of this plan: it would reduce wait times on buses, it would end the need to have a separate card in your wallet, it would save the MTA approximately $6 million a year producing those cards, it would save the MTA money maintaining MetroCard vending machines, and it would mark the end of the tyranny of the missed swipe.

You can peruse the whole presentation from this week's meeting here [PDF], but we've picked out the most relevant slides below. 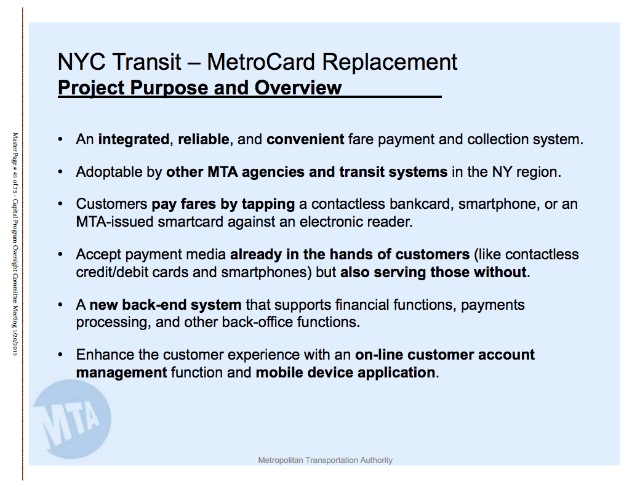 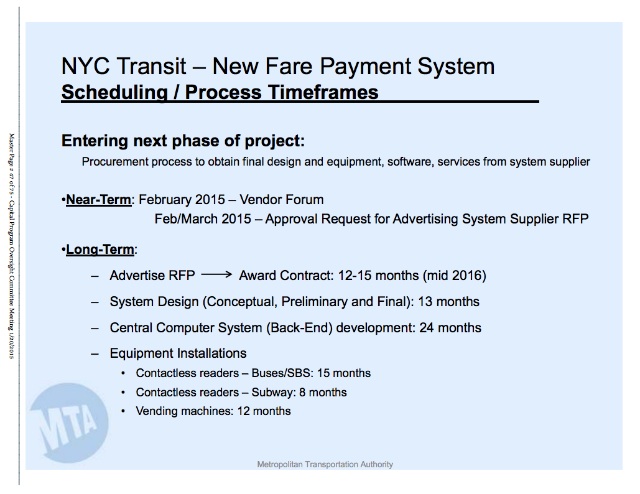 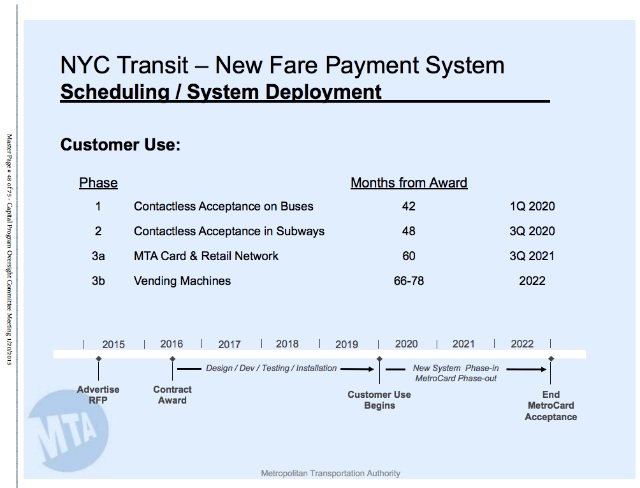 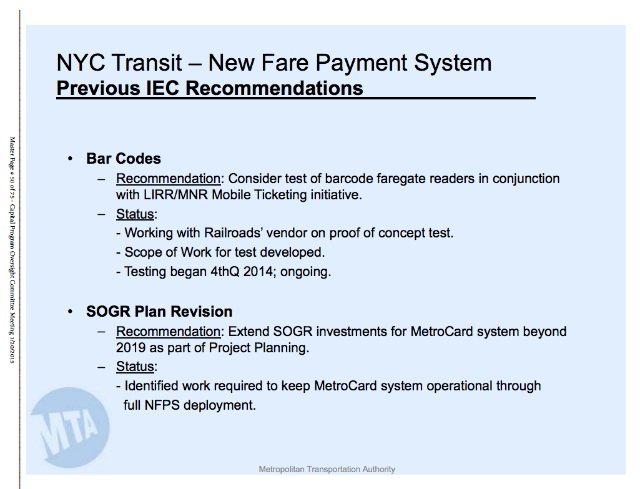 As for when we might learn more details about which system they decide to adopt: the MTA plans to let companies bid on the project until mid-2016 (note: it took six years to phase out tokens when the MetroCard was first introduced, hence the approximate 2022 date). However, they add that they have started testing out an app that will let Metro-North and LIRR riders pay on board; that app will theoretically be ready for use by 2016.

#ezpass
#metrocard
#MTA
#subway
#train
Do you know the scoop? Comment below or Send us a Tip