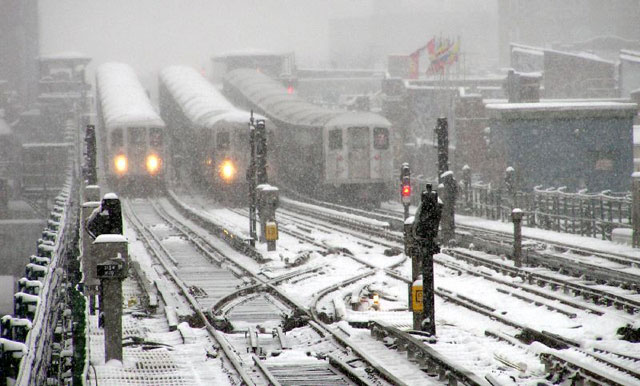 Photo of a snowy 7 line by gmpicket on flickr

If you actually believed the recent fare hike would go toward service improvements on city subways and buses, the MTA has a bridge to sell you. Due to a slowdown in real estate tax revenues, the agency said yesterday that it would have to postpone any planned service improvements promised to come with the fare hike. Despite already projecting a decrease in tax revenue, the MTA fell $21 million short of its projections for the year, with the MTA's CFO Gary J. Dellaverson saying, "We took these tax projections down quite dramatically from last year, and they are quite dramatically underperforming."

When first announced, the planned promised service improvements included: increased service on the G, 1, 4, and 6 trains, extended evening hours for the B and W lines, new bus routes, more commuter trains, and increased staffing at several stations. The improvements were projected to cost $30 million this year and $60 million a year starting in 2009. If its financial outlook improves by the summer, the MTA said the improvements could be an option again.

With the MTA claiming poverty already, and a gloomy economic outlook, how long will it be until other capital projects are shelved?