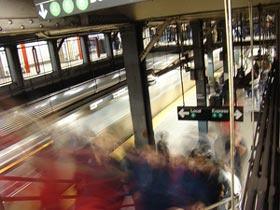 Get ready for primal screams across the region, if the MTA decides to cut subway, bus, and rail service as it faces its nearly $1 billion-deficit next year. The Daily News reports that MTA CFO Gary Dellaverson said the agency "recently told its divisions to detail ways to cut spending by about 4.5% in the event the economy deteriorates beyond the MTA's latest budget projections - or if city and state funding isn't increased to levels sought by the MTA."

The MTA has already been working on skimming its budget--and planning for fare and toll hikes. MTA spokesman Jeremy Soffin said, "This is an exercise in case of a hypothetical situation. It’s very preliminary," as did MTA transit committee chairwoman Doreen Frasca, who said, "Everything's going to be on the table - but service cuts will be the last thing on the table."

Still, with ridership continuing to grow and the city and state unlikely to chip in any more money, how the MTA will save any money seems pretty clear: Dellaverson said, "I think it's fair to say that it will be difficult for the agencies to find that much savings without affecting the service package."

#budget deficit
#bus
#lirr
#metro north
#MTA
#service cuts
#subway
Do you know the scoop? Comment below or Send us a Tip