Bad news, Washington Heights residents: The MTA plans to close down two of your local subway stations over the next three years, while besieging three others with construction crews. The work is scheduled for 11-to-12 month periods, staggered for your convenience—although I'll admit, this may not feel particularly convenient. Please keep in mind that things could always be more annoying, though.

For example: Just yesterday, the MTA's press release on the matter suggested that all five stations would fully shutter for overlapping one-year intervals, which would certainly be more aggravating. On Wednesday, the transit authority issued a clarification explaining that, no, three stations will simply be extra chaotic while two close down.

The agency maintains that it has no choice in this matter. Some of these stations have stood for over a century without major renovations, and all of them have demonstrably shoddy elevator systems. Because MTA elevators across the city occasionally break down and leave people trapped inside with no idea how or when or IF they'll ever get out, only one option exists: Constant construction.

"Replacing these elevators is long overdue and critical for reliable access to these unique 'deep stations,' and we've put together a schedule that takes care not to cause unnecessary inconvenience for customers," MTA New York City Transit President Andy Byford said in a statement, nodding to the "enhanced bus service" straphangers will enjoy in lieu of their everyday subway routes.

The stations on the chopping block are, in order of start date:

Please note that "the 168th Street A C station will be unaffected by the project," per the release. You can see why people were confused on that point: 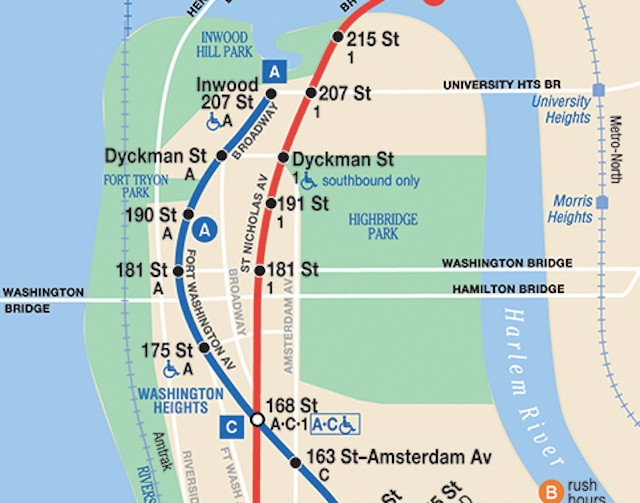 In addition to replacing the elevators, the MTA will also refurbish the stations' communications, security, and fire alarm systems. According to the transit authority, decades' worth of water damage and decay have slowly but surely eroded the elevators' ability to function, a scary prospect when one considers how far underground the train platforms sit. How far underground are they? The 191st Street 1 station, for example, is reportedly the city's deepest, situated 180 feet below street level. At 140 feet underground, the 190th Street A stop comes in second.

While the stations are down, the MTA will bolster M5 bus service, and encourages customers to make use of their free transfers to the M4 and M3 to reach accessible subway stations. It will also allow "three-legged transfers" so straphangers can cobble together new, multi-pronged commutes without paying extra fare because the MTA neglected these station problems seemingly until the last possible moment. Or so it appears to me!

#andy byford
#MTA
#subway
#upper manhattan
#Washington Heights
#we the commuters
Do you know the scoop? Comment below or Send us a Tip