The MTA pared down its five-year capital budget by 10 percent ahead of the city and state agreeing on funding it earlier this month, but has agreed to tack on a handful of projects in the weeks since. The MTA's board approved the plan and touted its savings today [pdf]. The scraps tacked on include a common-sense connection between the Livonia Avenue L and Junius Street 3 stations, a desolate block apart in Brownsville, and a $5 million study of the century-old common-sense idea of running a subway line down Utica Avenue. All told, the Mayor's Office is crowing about $300 million in city-requested projects that got added onto the $29 billion plan. Other new features include improvements to the following stations:

Also: $80 million in studies of topics including transit-oriented development, and a potential bus facility in Flushing, Queens.

In a statement, Mayor de Blasio called the assorted additions "a huge win for NYC riders across the five boroughs." 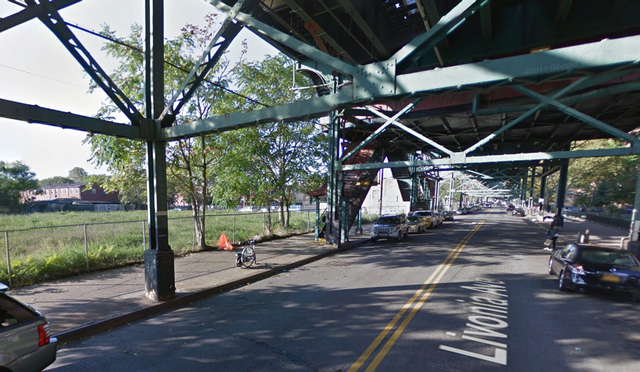 There's not much going on between the Junius Street 3 station, pictured, and the Livonia L stop a block away, but it'll cost you $2.75 to transfer. (Google Maps)

The missing Livonia-Junius connection, one of many vestiges of the days when the city's subways were operated by competing companies, forces Brooklyn commuters to swipe a second time to transfer—it'd be somewhat less noticeable if the 3 and L tracks didn't actually cross each other—and the desolate block separating the elevated stations has frustrated and frightened for years.

Also, why aren’t the L and the 3 at Livonia/Junius already connected? They’re a block apart and the hood is not exactly safe

• seriously, mta never thought to make the L train at Livonia and the 3 train at Junius a transfer instead of another fare?

The Junius Street 3 stop & the Livonia Ave L stop are 500ft from each other but there is no transfer. And we blame poverty on moral failings

The Livonia-Junius connector is projected to cost $30 million and be built in conjunction with $15 million worth of work to make the stations Americans with Disabilities Act compliant.

Brooklyn Borough President Eric Adams, who had asked that the MTA prioritize the link, also declared its inclusion a win.

"Today represents victory for the long-struggling straphangers of Brownsville and East New York," he said in a statement.

The need to run a subway line down Utica Avenue is also well-established, so much so that it was first proposed in 1910. The latest of many studies of the idea would look at the engineering requirements for such a subway line, and crucially given that the governor and mayor are still hazy on how they plan to pay for the repairs and improvements they just agreed on after a half-year of bickering, where the money will come from. (A Mayor's Office spokeswoman told us $1.9 billion of the city's $2.5 billion share will come out of higher-than-projected tax revenues and bonds, and the remainder would come from other sources including "value capture from joint City-MTA real estate," but that she could not get more specific.)

The plan still includes a laundry list of overdue fixes [pdf], such as bringing the subway and commuter rail systems' signals into the 21st century, spiffing up stations, and replacing old subway cars. It also funds some long-term construction projects, including the Second Avenue subway line. The next phase of the Second Avenue project is supposed to extend the line from 96th Street to 125th, and an earlier iteration of the capital plan funded digging the tunnel but not building the stations, meaning the end of the decades-old project has never been in sight.

However, under the trimmed-down plan, not even the tunnel-digging is funded. The earth-moving came to be ditched "over [the] last several months as we looked for efficiencies, and especially over [the] last few weeks as the final funding deal made clear what numbers we had to hit," MTA spokesman Adam Lisberg told us. What's left in the lite version of the capital plan is money to do the digging necessary to prepare to tunnel, meaning preparing to move utility lines, and creating access points for work crews and a boring machine, Lisberg said.

The squabble between Mayor de Blasio and Gov. Cuomo over how much the city would commit versus the state made for good political theater, but as Citizens Budget Commission head Carol Kellermann wrote in an op-ed earlier this year, "The choice between the City and the State is a false one," because what New York City residents pay makes up a disproportionate share of the state's tax revenue. Kellermann argues, and the brains behind the Move NY congestion-pricing plan agree, that "the real choice in funding mass transit" is between general taxpayers, transit riders' fares, and motorists. The Move NY proposal, which calls for adding tolls to the East River Bridges and lowering other bridge and tunnel tolls, would generate a projected $1.5 billion in annual revenue to put towards public transit.

Gov. Cuomo called an earlier version of the MTA capital budget "bloated," and his MTA chairman described Move NY as "not politically feasible." Where he plans to find the $8.3 billion he pledged to fund the MTA's capital needs without raising taxes remains to be seen.

#andrew cuomo
#bill de blasio
#capital plan
#kicking the ball down the road
#livonia-junius connection
#MTA
#subway
#utica avenue subway line
Do you know the scoop? Comment below or Send us a Tip