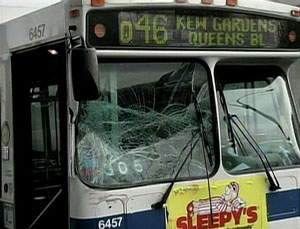 Earlier this morning, an MTA bus collided with a school van transporting children in Fresh Meadows, Queens. Details of the accident are thin, but initial reports say that up to 9 people are injured, most of which are children. The collision occurred just after 8 a.m. when the Q46 bus struck the van. The FDNY says that two critically injured children were sent to Long Island Jewish Hospital with one other child. Three other children were sent to Mary Immaculate Hospital and two more people were taken to Queens General Hospital and to New York Hospital Medical Center of Queens.

NY1 quotes an MTA official that says the bus was cut off by the van. We wonder if slick road conditions made stopping more difficult for the bus.