MTA Bus Drivers On The Stress Of The Job: 'There's No Off Button'

There's a whiteboard on the ninth floor of 195 Montague Street in Downtown Brooklyn, overlooking Cadman Plaza and a line of parked layover buses, where TWU Local 100 keeps a running tally of alleged assaults on Brooklyn bus drivers. Last year, there were 17 total. So far in 2017, there have been 40.

"These assaults could be anything from spitting in the face to hitting them with a cane, like we had just two days ago," said Louis Marrero, who represents union bus drivers in the borough and drove in Brooklyn for 10 years himself.

According to Marrero, most of this tension results from buses being late—too few buses held up in thick traffic, he says. "The stigma of of public transportation is, 'Oh these damn buses are late.' I get it, but ultimately we just need more service." 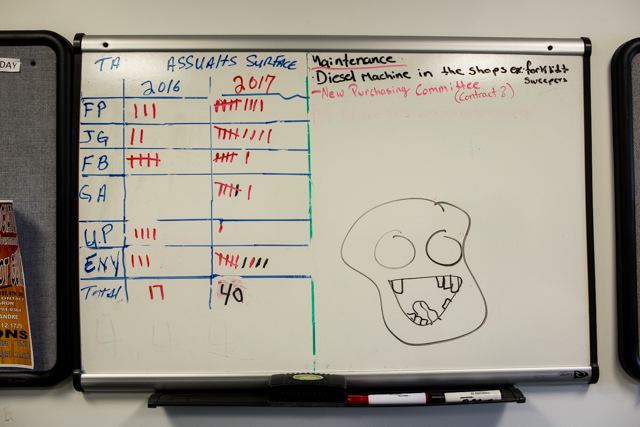 Calls for improvements to overall NYC bus service have been swelling for years, since the debt-strapped MTA's 2010 decision to drastically cut service (38 bus routes were cut entirely, 76 others were shortened). Meanwhile, ridership is on the decline. Transit advocates have issued a number of suggestions to improve service, from dedicated lanes and improved turning signals, to off-board ticketing to prevent scrambling for loose change while boarding. TWU says it'd like to see some of the old routes reinstated (which would also result in more union jobs). Also, more strategic routing: some buses could run express in one direction during peak times, for example, in order to get back to the congested stops quickly.

"People have jobs, and they need to keep their jobs, and they are getting to work late," Marrero said, of the current transit crisis. "Their bosses are threatening to fire them. When the guy who is told he's going to be fired gets on the bus, that stress meets my driver, and his stress. And then what happens? It's not healthy, it's not safe for anyone."

"I have a lot more bus operators getting a blood clot in their legs. Because they get to the end of the route and they can't get out of the seat, they can't go to the bathroom. It's hurting their kidney function.... There's no off button. It's stress from one end to the other."

We talked to a few other bus drivers Thursday, about how they manage that stress, and how the job has changed over the years. 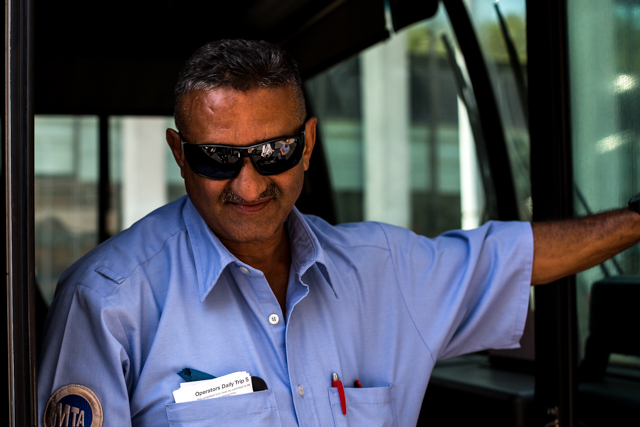 How has the job changed in recent years? There's more traffic. More cars and more people. The biggest challenge is people trying to catch the bus and darting out in front of cars and darting out in front of other buses. My biggest emphasis would be on the bikes and the skateboards. The trend has started maybe five, ten years ago with gentrification... before five years ago you never saw a skateboard. We have way more bikes out here.

How do you cope? You have to be extremely vigilant and it does add a lot of stress to the job... I go to the gym and I go to the sauna. I go swim laps, I go to the steam room. I don't know how anybody else releases their stress. I lift weights. That's how I release my stress. 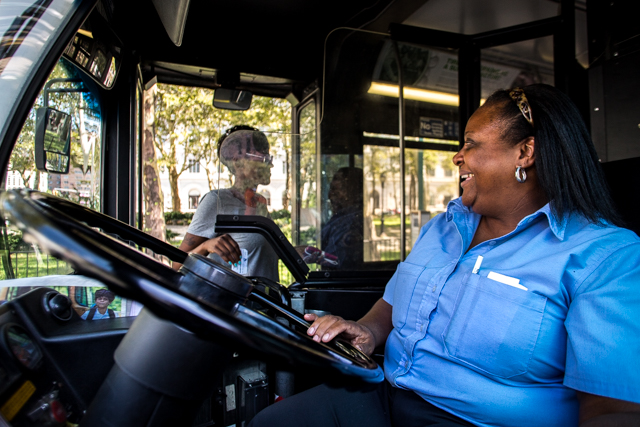 Tyra Strawder, 50, bus driver for 20 years. Currently driving the B52.

As a woman in this job, are there certain challenges you face? Yeah, especially, with men you sometimes feel challenged because sometimes you think, 'If you were a fella they wouldn't do that.' Thank god nothing physical ever happened. But we're human, so it becomes a little challenging.

What's an aspect of your job that riders don't tend to think about, or understand? Everybody wants the bus when they want the bus. What they don't understand is you're on a schedule, but schedules are not promises because there is so much construction going on. You have elderly people riding the bus, people traveling with babies—that takes time that's not in the schedule. And people don't understand that... forget about all the construction, the wheelchairs, the babies, the school kids—that plays a part in it.

What are some of the perks? There are good people. If you do a route for a long period of time you get to know the regulars. I've got cards and stuff, and thank yous, and offers to come to dinner—stuff like that.

Additional reporting by James Ramsay for WNYC. You can hear excerpts of these interviews here.

#bus drivers
#MTA
#TWU Local 100
#we the commuters
#original
Do you know the scoop? Comment below or Send us a Tip