Bonne-Annee, who was steps from his Farragut Road home, was pronounced dead at the scene. Prescott, a B44 bus operator, remained at the scene and has been charged with Failure to Yield. 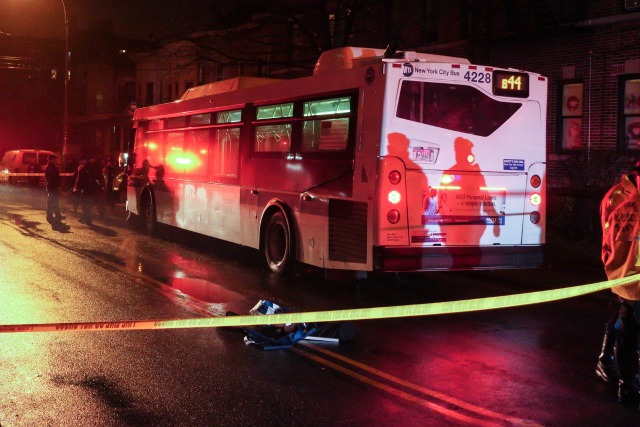 According to a city-wide study conducted in 2010, "failure to yield" is responsible for approximately 27 percent of pedestrian deaths in the city, making it the number one cause of such fatalities. Since de Blasio took office, the NYPD has dramatically increased the number of summonses issued for the violation.

Still, it's rare for a motorist to be arrested after a fatal collision, and MTA bus drivers have not been charged in a number of pedestrian fatalities this year. An MTA spokesman tells us last night's incident is still under investigation by the agency.

Update: After learning of the arrest, some Brooklyn bus drivers refused to leave the depot in protest. And the MTA has issued this statement:

The MTA offers its condolences to the family of the man struck by a B44 bus yesterday evening. The bus operator, a seven-and-a-half-year veteran, is being held out of service while we investigate this collision.

The MTA takes bus safety very seriously, and is working closely with the city’s Vision Zero initiative. Our enhanced safety efforts include more robust training for bus operators, an upcoming pilot program for new technology to warn pedestrians and bus operators of potential collisions, and new public service announcements to raise awareness of safety risks. Managers are conducting more observational rides to ensure safe bus operation, and safe driving tips have been posted throughout bus depots. The result has been a 14% reduction in bus collisions involving pedestrians and a 6% reduction in bus collisions involving bicyclists.

In November, we interviewed a veteran MTA bus driver about the challenges that come with the job.

#brooklyn
#bus driver
#cis
#east flatbush
#MTA
#mta bus
#original
Do you know the scoop? Comment below or Send us a Tip