MTA Breaks Ridership Record But It's Still So Broke

For five days last month, the MTA experienced record-high ridership numbers, culminating on September 23rd, when 6,106,694 people swiped their cards and used the most effective mass transit conveyance in the country. Ridership on New York City's subway hasn't been this high since the 1940s, but the MTA is still dangerously strapped for cash. A new audit by the state comptroller [PDF] shows that for every billion dollars the MTA has to borrow to meet its $15.2 billion capital campaign shortage, riders will experience a 1% hike in fares, in addition to the 4% hikes that are expected to kick in next year and in 2017.

"The MTA has made progress in closing the gaps in its operating budget, reached new labor agreements without raising fares and tolls any faster than already planned, and funded new services," Comptroller Thomas DiNapoli's office writes in their report.

But labor agreements will cost an extra $1.5 billion, and overtime costs will skyrocket to $801 million, $186 million more than the previous record four years ago.

There is also the matter of the MTA's debt piling up. 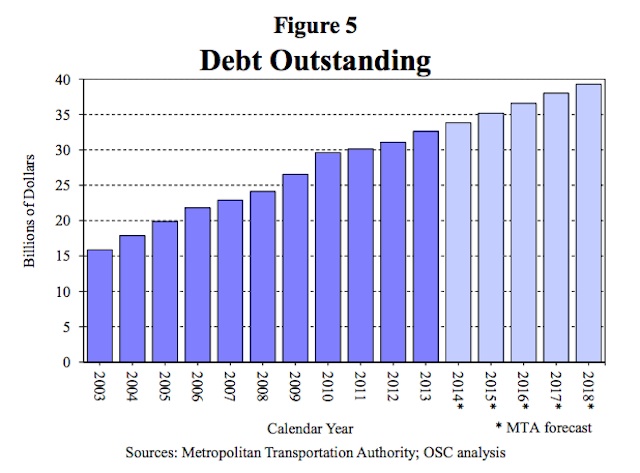 Governor Cuomo also "diverted" $30 million from the MTA to supplement the state budget this year, and expects to steal $20 million more every year; what is going to stop him?

Earlier this month, Cuomo called the MTA's request for $15.2 billion to pay for its $32 billion capital budget "bloated," because c'mon, do we really need amenities like leather seats and XM radiotrack, line structures, and new subway cars?

Meanwhile, “the trend towards increasing ridership is not expected to slow down," MTA president Carmen Bianco says in a statement.

"I think everything is on the table, from my point of view," Cuomo said yesterday with more than a touch of magnanimity, after reading the Comptroller's report. "And that’s where the conversation should start, with all options."

#fare hikes
#governor cuomo
#mass transit
#MTA
Do you know the scoop? Comment below or Send us a Tip