MTA Board Member: "Why Should I Ride and Inconvenience Myself When I Can Ride in a Car?" 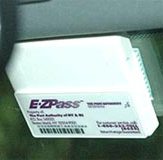 It's a tempest in an E-Z Pass tag teapot! With scrutiny about the MTA's decision to give lifetime free E-Z passes to board members (past, present, even dead) coming from Attorney General Andrew Cuomo, some board members who enjoy the perk plan to fight the MTA's attempt to take away E-Z passes and subway/bus and train passes for board members. It's against the law for MTA board members to take any pay for their jobs; the members would still be able to use the passes for official business.

MTA Board vice chairman David Mack, who has six E-Z passes (though he claims he pays for them out of his own pocket now), explained to reporters why it's important that board members drive and use their E-Z Pass. From the Post:

"If you [the average rider] saw something and called it in, it goes right there," Mack told reporters at a committee meeting, kicking a garbage can.

"Why should I ride [the train] and inconvenience myself when I can ride in a car?" asked Mack, who has six free E-ZPasses.

"It has nothing to do with free or not free. We want to encourage [board members] to use it so if they see something, they'll say something," he said, quoting the MTA's anti-terror campaign.

Really? So all the average riders who ride the subways, buses, Long Island Rail Road and Metro-North and see problems and tell the MTA, their suggestions/calls get thrown into the garbage can? Good to know!

The other point is that many of the board members are multi-millionaires, who can certainly afford E-Z Passes. AG Cuomo's special assistant Benjamin Lawsky told the Daily News, "It is ironic that at a time when the MTA claims to be strapped for money, they can still afford free E-ZPasses and other privileges for board members who are not supposed to be paid."

MTA Chairman Dale Hemmerdinger reversed his position and decided to work with Cuomo's office on the matter; eight votes are needed from the MTA board to approve the tag removal.

#dale hemmerdinger
#David Mack
#E-Z Pass
#free
#freebie
#MTA
#mta board
Do you know the scoop? Comment below or Send us a Tip