The MTA has decided to put the kibosh on "die-ins" at Grand Central Terminal, claiming that two protesters became aggressive with officers during yesterday's event.

The die-ins, in which protesters splay across the floor to draw attention to recent police killing of unarmed civilians, have been almost a nightly occurrence at Grand Central since last month, when a grand jury failed to indict Officer Daniel Pantaleo in the death of Eric Garner. According to MTA spokesperson Adam Lisberg, the decision to ban them came after two protesters—Reverend Billy and Marc Train—allegedly "put their hands on the arms of police commanders to try to stop them from doing their jobs."

"Reverend Billy was charged with obstructing governmental administration, and Marc Train was charged with disorderly conduct after doing the same thing several hours later," Lisberg told us. "We have been endlessly tolerant of the regular demonstrations there, but yesterday was the first time we were forced to make arrests. To be clear, they were not arrested for speaking or holding signs or protesting; they were arrested for physically trying to block police officers from doing their lawful duties."

Lisberg also added that all signs were returned to the protesters. "The only reason our cops started picking them up in the first place is that the protesters refused to," he said. 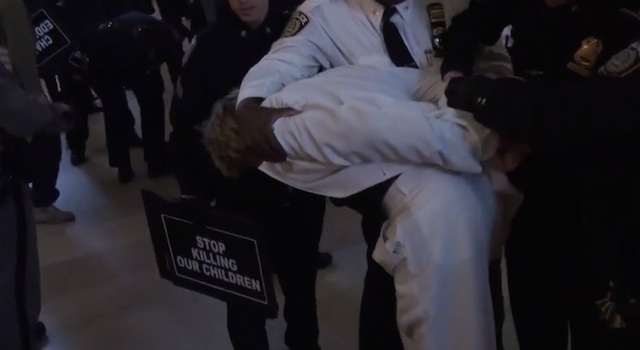 Lisberg earlier told the Wall Street Journal that the decision to ban the die-ins "came after protesters began laying placards on the ground." No mention is made in the Journal article of protesters laying hands on police. Asked to clarify the justification for the ban, Lisberg replied "Placards. Protesters were not only dying-in, but sitting in the center of the terminal floors for hours."

He told the Journal that other forms of protest would still be allowed. "The rules have always been you can’t lie down in Grand Central,” Lisberg said. “When the protests began, we were prepared to allow a disruption of the rules under the circumstances…We can’t allow it anymore.”

Protesters present at the time of the arrests said that neither Reverend Billy nor Train treated the officers with anything other than respect. "None of the protesters were aggressive at all," said Lorena Ambrosio, a member of the of the collective We Will Not Be Silent. "If anything it was the other way around."

Laurie Arbeiter, also a member of the collective, added that the action was held over 24 continuous hours, with protesters breaking only during the three hour period between 2 and 5:30 a.m. when the station is closed. The die-in portion was scheduled to last only 4 and a half minutes, a nod to the number of hours that Michael Brown's body lay on a street in Ferguson before it was removed. Arbeiter said that though officers had been in the vicinity of the protest since the day before, their decision to first insist the signs be picked up from the ground, before arresting Reverend Billy, seemed out of the blue.

"They said 'we let you have protests, we let you have die-ins here, but you cant have placards on the floor,'" and ordered the group to pick them up. "And what will happen if we don't pick them up?" Arbeiter asked. "Then we're going to do it for you," one officer answered.

There are currently two videos depicting the scene in which Reverend Billy was arrested, as well as Marc Train, who was collared several hours later. Reverend Billy is dressed in his standard uniform of a white jacket and black shirt; Train has a mohawk.

In the above video, police descend upon Billy and the rest of the group at 2:08, apparently indicating that the protesters' signs need to be picked up off the floor. The cops then commence in collecting the signs themselves, a move that displeased the protesters, who began chanting the word "shame." "You have forgone your oath to the Constitution," yells Train. "You are cowards and you are degenerates."

Another angle shows Billy being arrested at 2:09, though the camera again pans away as he's cuffed. At 2:46 it pans back, and shows Billy bending over before he is led away. At 4:02, another protester asks the reason for Billy's arrest. "Obstructing governmental administration," an officer replies.

Lisberg, the MTA spokesman, adds that both videos pull away from "the confrontation" with Reverend Billy, meaning "they don't have much evidentiary value." He also told the Post that "two separate protesters got physical with police commanders."

“We had to make the first arrests since the protests began," he said. "We can’t and won’t tolerate attacks on our police.”

#die-in
#grand central terminal
#protest
#original
Do you know the scoop? Comment below or Send us a Tip