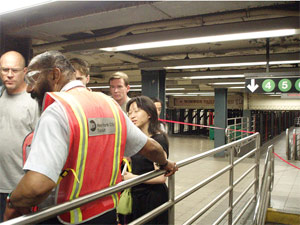 The MTA's CEO Lee Sander says that the agency will consider crediting unlimited ride Metrocards for travel missed on Wednesday, during the subway shutdown due to severe flooding. That's a novel idea from the MTA, but getting credited less than $4 seems like a hollow gesture - what about the overall pain and suffering of riders?

The MTA should try to do something more meaningful, though a something it could actually execute escapes us (we doubt they'd cancel a fare hike). Still the Straphangers' Campaign's Gene Russianoff tells the Times, "They have amends to make. It won’t reverse what happened, but it shows that the often faceless M.T.A. officials are human beings."

Sander also said, "There were aspects that could have been handled better by the MTA. I apologize for the fact that the system has not performed the way we would like it to." Well, sure.

Though the city braced itself for another heavy onslaught of rain today, it looks like we'll get less than two inches rain today. Which is good: There's only one subway service alert (the F in Queens). The MTA won't have to try out its heavy-rain tactics, which include placing additional pumps at certain locations, having more buses on handle for shuttles, and putting more personnel on site to direct people, although we do think it needs to be tested at some point.

#alert
#CEO Lee Sander
#fare
#fare hike
#flickr
#gene russianoff
#Lee Sander
#MTA
#people
#photos
#queens
#rain
#subway
#the city
#The MTA
#travel
#Wednesday
Do you know the scoop? Comment below or Send us a Tip
A new Gothamist is coming! We’ve moved comments over to our beta site. Click here to join the conversation and get a preview of our new website.