Because we're all just sardines packed into an under-funded can, the MTA has announced that it will be rolling out more frequent weekday (and in some cases, weekend) trips next summer on the 1, 2, 4, 5, 6, A, C, E, J, M, N lines, as well as the track that serves the Times Square shuttle.

The Times Square S will be benefiting the most from the proposed changes—the number of weekday trips between Times Square and Grand Central will double from 12 to 24 between 9:30 p.m. and 11:30 p.m., reducing the average wait time to an estimated 5 minutes.

Here's the full breakdown, showing how many fewer minutes of suffering you'll endure come June (unless you ride the G). Note that your Sunday brunch C train will soon be breezing through the station every 12 minutes: 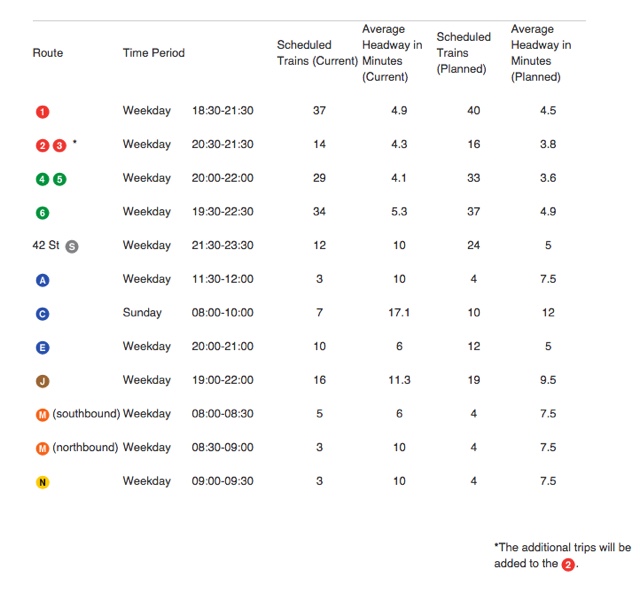 This increase in trip frequency, which has already been factored into the 2016 budget, will cost an estimated $5.8 million annually.

Wondering why your beloved G/R/L/F/Z/B/Q/D/7/Franklin Avenue S didn't make the list? According to the MTA, the number of trips that can be added is "limited due to car and track capacity constraints during peak hours and the need to perform ongoing maintenance and capital construction work during off-peak hours." There you go!

"This is good news for transit riders," said Riders Alliance Executive Director John Raskin in a statement. "More trains means less waiting on lonely platforms, especially at night and on the weekends."

Interim NYC Transit President James Ferrara made a statement about these changes as well, reminding anyone who will listen that the MTA is doing its best with the resources it has.

"Our subway system is more than a century old and even where we are aided by new technology, we are still limited by the overall age and condition of the system and the maintenance that is needed to run trains safely," he said. "Making these service changes wherever we can lets us make the best use of existing resources."

#c train
#crowding
#funding
#MTA
#overcrowded
#times square shuttle
#original
Do you know the scoop? Comment below or Send us a Tip