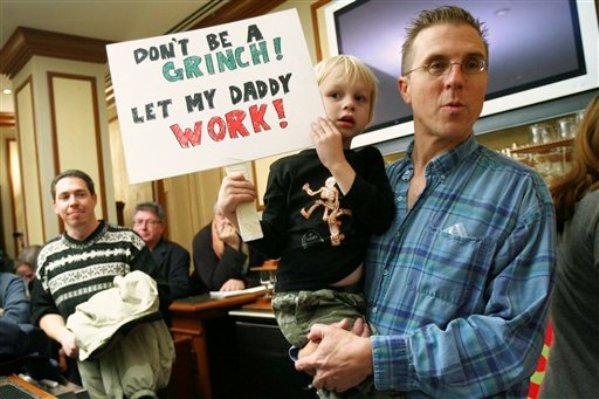 The Broadway stagehands strike may not be a hit with audiences, but it’s settling in for a long run anyway. Day eleven of the strike is dominated by the dashed hopes of children who’d been promised a visit to Whoville. Yesterday James Sanna, a producer of “The Grinch”, announced that because the show had a separate contract with the stagehands’ union, they’d reached an agreement that would let the kid-friendly musical continue its brief run, which ends January 6th. On Monday morning the union stopped picketing outside the theater, and it seemed the Grinch would be sneering down from his mountain as early as tonight. 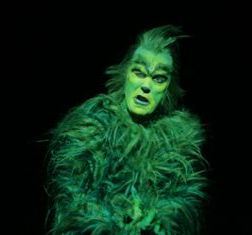 Just one catch, kids – the St. James Theater is owned Jujamcyn, which is a heavyweight in the producers' league, and the owner has silenced the jubilation by refusing to open the theater: "The Grinch will not reopen until the union signs agreements and ends the strike at all theaters and all the other shows that have been closed by their strikes reopen on Broadway."

"The Grinch" producers hastily assembled a press conference last night, thrusting 9-year-old Athena Ripka, who was to play Cindy Loo, into the klieg lights: “It's always been my dream to be on Broadway,” she gurgled through tears before being carried out of the room, bawling, by her stage mom. Sanna unloaded too, vowing to take Jujamcyn to court: “The Grinch is a PR football being kicked around and we're not going to take it anymore. We are seeking an injunction.”

In the meantime, rumor has it that the cast of “The Grinch” will performing the opening number from the show on the street at 7pm tonight outside the St. James Theater on West 44th Street. And talks between the stagehands’ union reps and the producers’ league have been scheduled to continue again on Sunday. Parents with "The Grinch" tickets scrambling for a Plan B should turn to our thorough index of great family-friendly and lower cost theater alternatives – some of them located right in the Times Square theater district.

Photograph of 4-year-old Steve Kenyon holding a sign in support of his father, James, a musician in "The Grinch," as they await the press conference by Mary Altaffer/AP