Moynihan Station Plans Off the Tracks 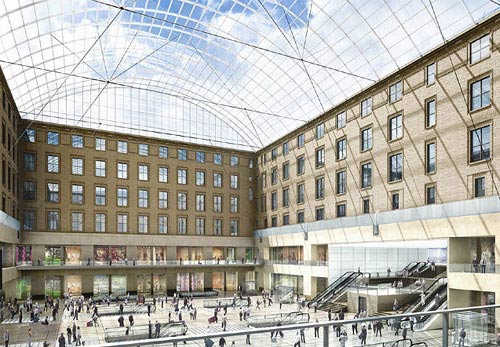 Less than two weeks after Gov. Spitzer publicly reaffirmed his commitment to going forward with plans to construct Moynihan Station despite a $1 billion funding shortfall, it looks like the matter may be out of his hands. The New York Times is reporting that the whole $14 billion project, which would involve building Moynihan Station at The Farley Post Office building and constructing a new Madison Square Garden on the site, is on the brink of total failure.

Numerous factors are proving insurmountable. The cost of constructing the station ballooned from an initial estimate of $1 billion to $3 billion before work could even begin. Representatives from Madison Square Garden didn't even show up for a recent planning meeting on the project, as it looks like the owners are going to go ahead with a multi-million dollar renovation of the existing arena rather than wait around for movement on a plan that just can't get started.

Budget crunches in the City and Albany have left boosters at least $1 billion short of funding to construct a new train station. A difficult financing environment are leaving a lot of ambitious projects in precarious positions. State Assemblyman Richard Brodsky commented to The New York Sun on a need for cash after a hearing earlier this month.

For Moynihan, he said, "They need over $2 billion and they have maybe around $1 billion. They need maybe $3 billion for the 7 line, they have maybe $2 billion. They are trying to figure out what to do on Hudson Yards and it looks like that is not coming together. With Javits, it looks like they are wasting $800 million on a plan that does nothing." "The West Side stuff is in really tough shape," Mr. Brodsky said in an interview yesterday, following the hearing.

The Empire Development Corp. hoped to begin construction on Moynihan station in the fall of 2006. Any hope of regaining a train station even close to the grandeur of the old Penn Station, which was demolished to make way for the current Madison Square Garden arena, is fading quickly.