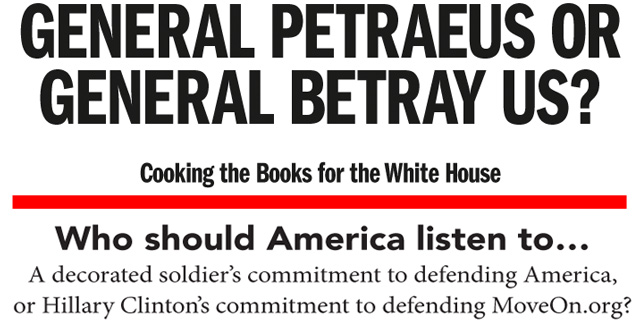 If The New York Times needs a rationale for allegedly discounting the ad rate it offered the advocacy group MoveOn for its ad alleging that General Petraeus was betraying his country my misrepresenting the true state of Iraq, we suggest characterizing it as a loss leader, because a lot of ink is being spilled and paid for in response to it.

Former New York Mayor Rudy Giuliani hasn't even won the Republican nomination yet, but he's already lashing out at Democrats––and fellow NY politician Sen. Hillary Clinton in particular––for adopting a tone that was skeptical towards Gen. Petraeus's testimony before the Senate. Giuliani's ad, which he's actively soliciting campaign contributions to put in print, equates and contrasts Sen. Clinton's silence regarding MoveOn's stance with Petraeus's career of military service. Giuliani asked for and received an equal rate to run his ad in the Times today.

Adding to the controversy surrounding the ad and anyone's response to it is the fact that The New York Times charged MoveOn significantly less than the standard quoted rate for a full-page political advocacy ad. To many, this is another piece of "smoking gun" evidence supporting accusations of political bias that have been leveled against the paper for ages. In an ironic twist, some people are arguing that any discount given to MoveOn should count as a financial contribution to a political cause or candidate and could qualify as a violation of the McCain-Feingold campaign finance rules that the paper enthusiastically supported. The Times says that it didn't give MoveOn any preferential pricing and that the rates advertisers are offered are based on the timing and basis of placement, which in this case was completely normal.