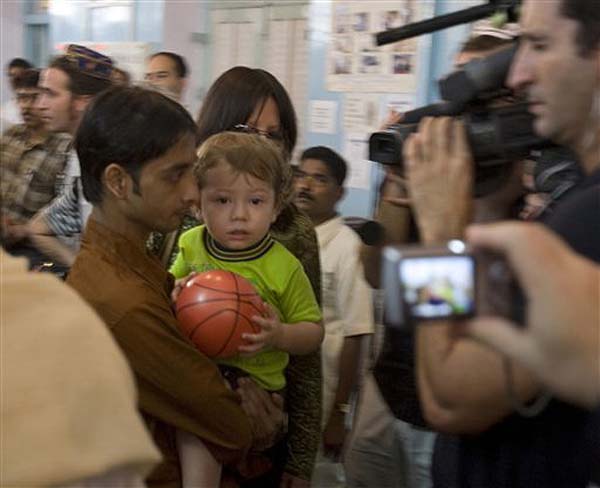 Photograph of Moshe Holtzberg, the 2-year-old orphan of the rabbi and his wife slain in the Mumbai Jewish center, at a memorial service in Mumbai, India from the AP

Two-year-old Moshe Holtzberg cried out for his parents during a memorial service for them and others killed at a Jewish Center in Mumbai, India last week. Brooklyn couple Rabbi Gavriel Holtzberg and his wife Rivka, who had moved to Mumbai to run the Chabad House in 2003, died in the terror attacks while little Moshe, reportedly found next to his parents' bodies, was spirited out by his Indian nanny.

Rivka Holtzberg's father said, "The house they built here in Mumbai will live with them. They were the mother and father of the Jewish community in Mumbai. The House of Chabad will live again." The NY Times details how the Chabad movement is committed to rebuilding and continuing the mission. And a friend of Rabbi Holtzberg says that when he called the couple's cell phone, he spoke to one of the militants holding the group hostage at the Chabad House. Rabbi Levi Shemtov said, "He said the rabbi was okay, everyone was okay, that if they did what he wanted he would free them. I asked if we could hear the voice of the rabbi, or someone who was alive there. We only heard the voice of one woman screaming in English, 'Please help immediately.'"

The attacks killed over 180 people. USA Today notes the anger that residents feel against the government and terrorists; at a vigil, a young person held a sign reading, "Mr. Terrorist, I am alive. What more can you do? Mr. Politician, I am alive despite you. Proud to be an Indian." As for Moshe Holtzberg, he is heading to Israel for his parents' burial. The Israeli government granted his nanny, Sandra Samuel, who saved him a visa to travel with him.