The man allegedly caught on video smashing in an SUV window after a high-speed motorcycle chase showed a considerable lack of decorum during his arraignment yesterday. Reginald (Reggie) Chance, 37, was in Manhattan Criminal Court to face assault and gang assault charges when he turned toward court reporters and photographers and raised both middle fingers in salutation. Oh, my stars and garters! 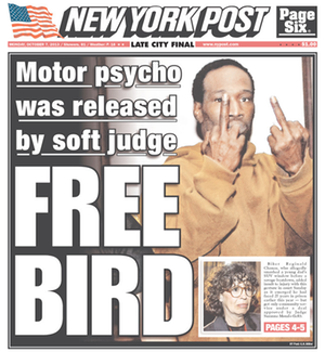 Chance is the fourth person arrested in connection with the beating of SUV driver Alexian Lien last Sunday after a high speed chase that started after Lien plowed through a group of illegal motorcyclists who had surrounded his Range Rover. Chance was charged with criminal mischief and gang assault; biker Christopher Cruz was charged with reckless endangerment and unlawful imprisonment for braking suddenly in front of Lien; biker Robert Sims, who is seen opening the SUV's door midway through the video below, was charged with gang assault and criminal possession of a weapon.

Manhattan Assistant ADA Samantha Turino told reporters yesterday that Chance "set into motion a chain of events that resulted in the driver being dragged out of his vehicle and beaten" by others. "His license is currently suspended and he should not have been driving anyway." The Post reports that Chance has 21 prior arrests for charges ranging from drugs to robbery to gun possession.

Chance's lawyer doesn't deny his client smashed in Lien's window with his helmet, but he argues that Chance was merely trying to identify the perpetrator of a hit-and-run that left one biker paralyzed. After bashing in the window, Chance's lawyer says his client left the scene and did not participate in any gang assault. "This is not a man riding around assaulting people with a quote-unquote 'gang,'" attorney Gregory Watts said yesterday. "We will hotly contest those allegations."

A passerby who witnessed the assault and intervened on behalf of Lien came forward yesterday. Segio Consuegra, 52, was on his way to church in Washington Heights when he happened upon the violent scene and jumped between Lien and the assailants. "We saw one of them opening the door of the passenger’s side and trying to force the lady out of the car,” Consuegra tells the Daily News. 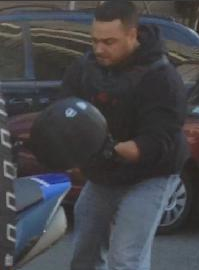 In an interview with ABC, Consuegra recalled that his intention was to "show these people that I'm [not] here to engage in any kind of confrontation but that I'm here to protect the man and the family, so I'm going to keep it cool." After persuading the bikers that Lien had been beaten enough, they drove off, and he called 911. Which is a lot more than an undercover cop who witnessed the assault did.

A fourth biker who turned himself in to police was released after the Manhattan DA declined to prosecute. The NYPD is searching for at least two more motorcyclists involved in the assault, including this "person of interest" pictured at left.

On Sunday we received tips that another illegal motorcycle rally was underway in Brooklyn and Manhattan; one tipster told us she saw "hundreds—and I mean hundreds—of bikes come over the bridge, heading straight on Delancey. I couldn't even see the end of the chain. It may have been back in Brooklyn." If you saw any of this, drop us a line.

#dirt bike rampage
#motocyclists
#motorcycle rally road rage
#reginald chance
Do you know the scoop? Comment below or Send us a Tip