A recently arrived Mexican immigrant who was accidentally shot by an NYPD officer in pursuit of a robbery suspect spoke today from her Bronx bed about the incident, and the $10 million notice of claim she has filed against the NYPD and the City of New York.

Irene Ureña Perez, 46, was shot in the stomach on December 5th by a plainclothes police officer identified as Juan Gomez, 30. Gomez was in pursuit of a suspect who had allegedly robbed a drug dealer inside a building on West 183rd Street, with the chase continuing down Loring Place North. Gomez fired 27 shots during the chase, with some striking parked cars and the walls of apartment buildings on the block, the New York Times reported; one hit Perez, who lives around the corner, in the abdomen, while another hit a nearby 12-year-old girl in the leg.

Greeting a small throng of journalists Wednesday morning in the lobby of the victim's building in University Heights, Perez's attorney, Sanford Rubenstein, recounted how Perez had left her job at a daycare center, and was walking a young girl home, picking up her mother at a nearby senior center on the way. "As she entered the street she was shot in the stomach, one of 27 bullets fired by a police officer, who was engaged in a gun battle with an alleged drug dealer, who fired twice at the police officer," said Rubenstein. "Twenty-seven shots. A 12-year-old girl shot. Bullets on the sidewalk, on the buildings, on cars in the vicinity. An unreasonable risk of danger to innocent bystanders."

From her bed, Perez told reporters through a translator, "In my life I've never seen something so devastating. I went to get my mother from daycare, I was leaving. I was going down the steps, pushing a carriage and there was a lot of gunshots fired, a lot, a lot of shots."

Perez recalled, "I pushed my mother back, I took the carriage with the child and my stomach just got so swollen. I couldn't breathe. All I said was 'Mother, they've killed me.'" 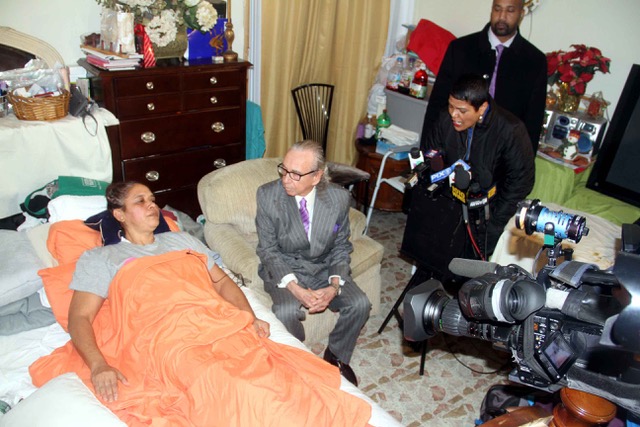 According to Rubenstein, Perez underwent three surgeries over the 13 days she was hospitalized, and more surgeries may be required. "My family is devastated," Perez concluded, "I came here to work. I don't know when. This is a process that is huge. I feel real bad."

Perez's mother, Doris Ureña, told reporters through a translator that she would be taking her daughter back to the hospital later today. "My daughter's not well, every day is something different," she said. "She's too slim, she's constantly not breathing right. I want justice."

"The fact of the matter is the public should not be put at risk by reckless firing by a police officer engaged in a situation in which he very well did not have to fire that many shots," said Rubenstein. He added, "We have filed a notice of claim for $10 million in damages for this victim. The district attorney's office is engaged in an investigation in which Irene is fully cooperating."

The shooting in University Heights was the latest in a series of incidents in recent years in which bystanders have been wounded in public gunfire unleashed by NYPD officers. Twenty-two bystanders were struck by police bullets between 2010 and 2016, according to one study; in the most high-profile incident, two officers confronting a gunman outside the Empire State Building fired 16 shots, hitting as many as nine bystanders. A 2008 RAND Corporation study found that on average, 82 percent of shots fired by police missed their targets.

In 2012, the NYPD modified its ban on officers firing weapons in such as way as to "unnecessarily endanger innocent persons" by adding the words "in their professional judgment."

The NYPD and its law department do not comment on pending cases, but the department reported that it has stripped Gomez of his gun, and he remains on desk duty until an inquiry by the Force Investigation Unit.

From her bed, Irene Urena Perez says she came to US to work, now has to go back to the hospital today after an #NYPD bullet struck her in the stomach during a shootout with a suspect Dec 5. She’s had 3 surgeries already and says she’s in pain. Suing city for 10 mil. #1010WINS pic.twitter.com/tDsqwm0IVh

#bronx
#Irene Urena Perez
#nypd
#police misconduct
#original
Do you know the scoop? Comment below or Send us a Tip