After nearly six months of appeals, the family of Mathieu Lefevre, the bicyclist killed by a flatbed truck driver at an East Williamsburg intersection last October, has received all but one of the answers they have demanding. Yesterday, after denying a motion to allow live testimony by Lefevre's mother, Erika, Judge Peter Moulton listened to an oral argument on whether the NYPD met its obligations to the family under the Freedom of Information Law, and will decide in the coming weeks if family's suit warrants remuneration.

The Lefevres' attorney, Steve Vaccaro, argues that the NYPD violated FOIL by withholding and delaying the release of records without adequate justification. They are hoping to be compensated for the cost of pursuing this litigation, as well as bring light to the twisted process victims' families must go through to simply get the facts. For one thing, the Lefevre family had to learn through the media that the driver who left Mathieu for dead would not face criminal charges—and the NYPD would not even return their calls.

In court yesterday, Vaccaro argued that families of victims should be entitled to receive information before the press. To which Judge Moulton questioned, "Isn't that was government does, spin the press? It's not unusual. It's not unlawful." Vaccaro argued that FOIL is intended to counteract exactly this kind of spin, and the NYPD's stonewalling had violated the law. The NYPD's attorney, however, said the department went "above and beyond" what is typically required of them under FOIL.

On April 18th, the night before the hearing, the NYPD finally hand-delivered additional unredacted audio files which, according Vaccaro, contained statements that had not been provided in previous transcripts. The defense maintains that the six and a half hours of radio transmission recordings between officers from the night of the incident were, in fact, provided to the family, but in the form of abbreviated sprint report transcripts. 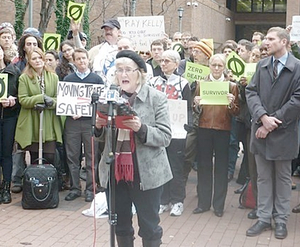 Among other issues cited were the crash scene photos "misplaced" by Detective Sheehan. When they were subsequently "found" and turned over to the Lefevres, they contained sequential inconsistencies. This was explained at yesterday's hearing as a simple oversight by the technician who mistakenly made two CDs with the same video, rather than one CD with video and one with photos. But the family has still not received an explanation for the gaps in the photos' file numbers. And the surveillance videos provided to the family appear to be inconsistent with investigators' written reports.

At one point during the hearing, the judge suggested that the NYPD's failure to turn over documentation could be considered de minimis delay, but for Erika Lefevre—currently on her fifth trip from Canada to NYC to deal with legal proceedings—there's been nothing trifling about it. "[The judge] should walk in my shoes for a day, or a week... or a month," she told us through tears, "We thought we could get answers. The city needs to acknowledge the experience [victim's families] are going through. That's not what a civil society is supposed to do."

Not less than five months since the initial FOIL request was made, Lefevre's family has supposedly received all pertinent documents, though Vaccaro is still skeptical. The family is hoping for a decision in the next few weeks and believes that had they not held the NYPD's feet to the fire in the form of a lawsuit, it would have just continued to "delay, delay, delay." This morning, Vaccaro tells us:

The Lefevres appreciated Judge Moulton's acknowledgment of their loss at the start of the hearing, and were encouraged by his statement that he was "troubled" by NYPD's "dribbling" of information over months, including an eleventh-hour disclosure the evening before the hearing. Recognizing that they have for the most part "won" by obtaining 90%+ of the documents they sought from NYPD in six months, while other victims families have been forced to wait more than a year, the Lefevres are hopeful that Judge Moulton will recognize the human toll on victim's families, and order NYPD to face some consequence for its unjustified delays.

#bicyclist
#bicyclist killed
#cyclists
#FOIL
#mathieu lefevre
#nypd
Do you know the scoop? Comment below or Send us a Tip