A TSA agent at JFK "started screaming at me and cursing me and threatening me," says a Long Island man who used his cell phone to videotape what he describes as an unnecessarily "aggressive" security screening of his developmentally disabled daughter. Dr. Joshua Frank, a Long Island pediatrician, is the father of Dina Frank, a girl with cerebral palsy who walks with crutches and leg braces. She can't pass through metal detectors for this reason, and is usually patted down by security agents, a procedure that frightens her. And the Frank family tells The Daily that on Monday the procedure was particularly harrowing.

“They still attack her like she’s Osama bin Laden,” Dina's mother tells says. On Monday, the family missed their flight to Florida because the TSA decided that Dina had to go through security twice—because procedures weren't followed properly the first time. During their first pass, a female TSA screener allegedly screamed at Dr. Frank when he started documenting what he perceived to be an "exceptionally aggressive" pat-down. Ultimately, a supervisor intervened, and after an inspection of Dina’s crutches the family was allowed to proceed to their gate. 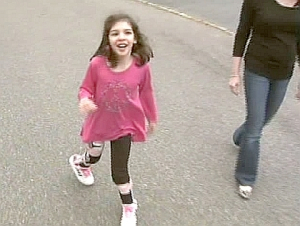 But after the family had spent an hour at the gate waiting for their flight, the TSA screeners returned and said Dina had to be screened again. “So then I got aggravated,” Dr. Frank tells The Daily. He put Dina in a wheelchair and raced her back to the gate, but by the time she passed through security a second time, they'd missed their flight. On the plus side, countless lives were saved because the TSA thwarted little Dina's dastardly plan to hijack the plane and fly it to the American Girl doll headquarters.

“They have to do this in a more humane manner. I feel their screeners are amateur. I feel like they’re unprofessional,” Dr. Frank told CBS 2. “The fact that they consider her walking devices and her cane to be a suspicious device, that’s treating her like a terrorist.” In an attempt to avoid controversies like this, the TSA recently introduced a TSA Cares hotline, a dedicated resource for passengers with medical conditions, disabilities or other circumstances or their loved ones who want to prepare for the screening process prior to flying.

#airports
#cerebral palsy
#jfk airport
#tsa
#tsa follies
#tsa security
Do you know the scoop? Comment below or Send us a Tip