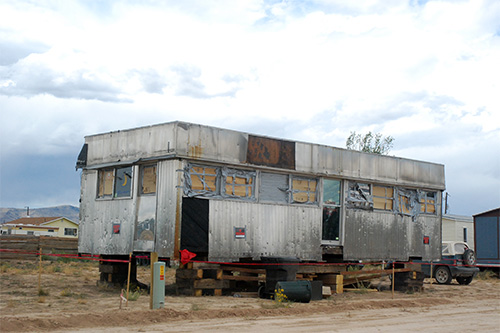 We haven't checked in with the somewhat recently relocated Moondance Diner since September. At that time new photos of it in La Barge, Wyoming (the diner's new home) surfaced, and it wasn't lookin' too pretty. Well it just got worse for the wear.

Reports are in that last week the diner "simply crumpled under the accumulated weight of snow on its roof." The town clerk says that it's nothing but a heap now, and the couple who bought the diner for $7,500 "said the demise of the diner was not entirely unexpected, and that the pieces were still going to be installed in the new foundation they were in the process of constructing." If the snow had been accumulating all winter, why not take the time to clear it off the roof now and again?

With the original sign safe in storage, the new owners still hope to open in May of this year, with the Moondance back to its Alan Bushbaum-remodeled glory. Good luck, Pierces!

#damaged
#La Barge
#moondance diner
#snow
#wyoming
Do you know the scoop? Comment below or Send us a Tip