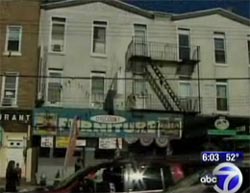 The discovery of a dead 11-year-old girl in a Brooklyn apartment led to the girl's mother to admit to killing her, according to police. WABC 7 reports that Florenzia Vazquez told police she beat daughter Alejandra "with a mop handle so hard, it broke in two." Vazquez is being held at the 75th precinct.

The beating apparently took place on Thursday--according to the NY Times, it was "a thrashing so severe it left the girl listless, vomiting and confined to bed." And she was left there to die, only to be discovered on Sunday when a man came to rent a room in the apartment. Alejandra had arrived from Mexico a few weeks ago, to join her mother in New York; she had told friends she was being beaten. An older sister had been removed from the home earlier this year after abuse allegations.

Vazquez reportedly initially said Alejandra had been involved in a street fight, but after hours of questioning, she confessed to the murder; a police source explained that she "despised everything connected to her ex-husband." And the landlord who rented out the apartment to the family (Vazquez lived with a boyfriend) six months ago told the Post, "I can't explain how that happened. Those people looked like nice people." Vazquez's three other children were removed from the home.