A 29-year-old Bronx woman was arrested last night and charged with reckless endangerment and abandonment of a child after her young son was found alone in a stroller on a Bronx street corner. Police say Diana Paniagua left her son, believed to be approximately two-years-old, on the corner of East 141st Street and Rider Avenue shortly before 5:30 a.m. yesterday and simply walked away. Fortunately, a kind-hearted propane delivery man named Jason Alexander came to the rescue. 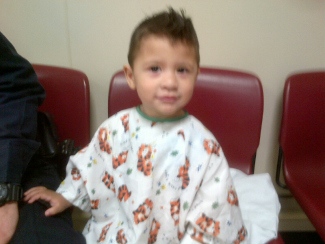 Alexander tells CBS 2 he saw the boy "being pushed in a blue stroller by a Hispanic woman with all black clothing and her hair in a bun." He said the woman "seemed out of sorts," so he asked her if she needed any help. She said no. Later, he spotted the woman walking alone and asked her where her child was. When she didn't respond, Alexander returned to the corner where he previously saw her and found the boy, cold and dirty, all alone the stroller.

“He was actually crying and reaching out to me, and he was in pretty good condition, all things considered," Alexander recalls. "When I picked him up, he stopped crying. Alexander tells the Post, "He didn’t seem like he was used to that kind of treatment."

The unnamed child was taken to Lincoln Hospital for evaluation and is now in the custody of the Administration for Children’s Services. His godmother tells CBS 2, "I’m in disbelief. I’m in disbelief, I don’t think she’s capable whatsoever of leaving her son unattended in the street."