A long stretch of Atlantic Avenue will receive retimed stoplights, increased NYPD enforcement, and, most importantly, a 25 m.p.h. speed limit before the end of the month, as part of the Arterial Slow Zone Program—a key element of Mayor de Blasio's Vision Zero campaign to reduce traffic fatalities across the city.

The first of the program's 25 planned Arterial Slow Zones, this nearly eight mile stretch of busy Atlantic Avenue from the Brooklyn Heights waterfront to 76th Street in Woodhaven will hopefully become safer ground for motorists, cyclists, and pedestrians alike. The portion of road in question saw 25 fatalities (13 of them pedestrians) between 2008 and 2012.

Transportation Commissioner Polly Trottenberg made it clear at a town hall meeting last month that Atlantic Avenue topped the city's list of perilous arterial streets in need of reduced speeds, and confirmed at a press conference today that the safety measures will be in full effect by the end of April. Additional efforts to safeguard cyclists and pedestrians, including the expansion of some medians, are also said to be in the works.

At the press conference, which was held at Brooklyn's Lowry Triangle, Borough President Eric Adams remarked that "by decreasing the speed limit...we are saying that we can have a smooth traffic flow of vehicles without having a reckless and senseless traffic flow of blood."

"The pain never dissipates, and it's a constant reminder each time you read about another accident or you see the white ghost bikes that line the corridors of our streets," Adams added. 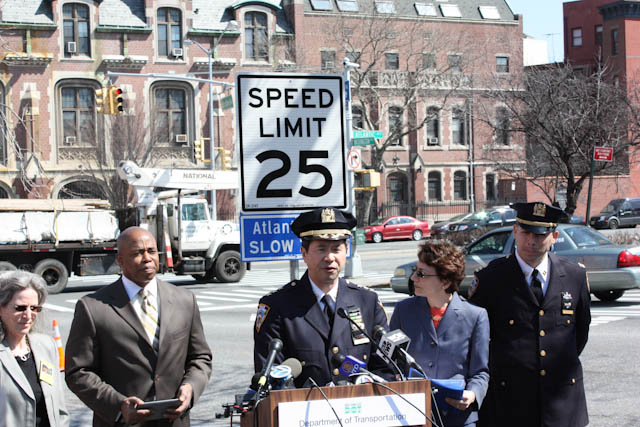 Amy Cohen, whose 12-year-old son Sammy was tragically struck and killed on Prospect Park West six months ago yesterday, was also present at the conference on behalf of Families for Safe Streets and implored both elected officials and city residents to support the rapid enactment of Vision Zero measures across all five boroughs. Cohen described life since her son's accident as "more painful than anyone should have to endure."

It's a tragic reality that fatal pedestrian accidents can happen anywhere and are in no way contained to multi-lane, fast-moving roads like Atlantic Avenue. Still, Vision Zero's modus operandi is to target the statistically most problematic parts of New York's traffic system and arterial zones, which are the site of roughly 60 percent of pedestrian fatalities, according to the DOT. Other initiatives on the docket include more thorough crash investigations as well as additional speed and red light cameras.

The Arterial Slow Zone Program is just one of 63 traffic and pedestrian safety proposals found in the de Blasio administration's Vision Zero report [pdf]. While the February report does not specifically name any arterial zones due for speed reductions (including this newly-slowed stretch of Atlantic Avenue at hand), today Cohen mentioned Queens Boulevard, Northern Boulevard, and Bedford Avenue in a list of deadly thoroughfares in need of safety measures.

As of March 19th 27 pedestrians had been killed by cars in NYC. Just this morning a cyclist was also killed in a hit-and-run collision in Bushwick.