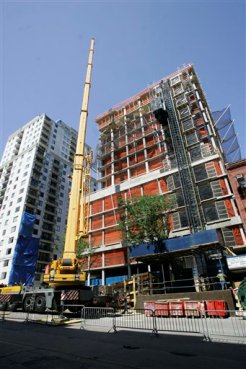 The Building Department allowed "most" crane operations across the city to resume as the investigation into what caused Friday's fatal crane collapse at East 91st Street continues.

Mayor Bloomberg said yesterday, "It would appear that there is no connection whatsoever between the two accidents. They're very different things," the second accident being the March 15 crane collapse which left seven people dead. The March 15 incident may have involved a nylon sling that failed, while the criminal investigation into Friday's collapse seems centered on the crane's age and condition.

The Mayor also defended the Buildings Department, which has been criticized after these and many other construction-related fatalities and accidents. He said, "We have a Buildings Department that has many thousands of people, and I think it’s fair to say that they probably have prevented an enormous number of things that could have led to accidents." And the Mayor's office points to the recent increase in buildings inspectors and a $4 million safety program as a sign of the city's commitment to safer construction.

However, for all those resident who fear those towering cranes, one crane safety consultant told the Daily News that residents are right and should "steer clear of construction." Jeff York, who is based in California, said, "If you see a crane, walk on the other side of the street... I guarantee that crane did not just plop off there on 91st St. with no warning signs."

The body of Ramadan Kurtij, a construction worker who was working on sewer lines on the ground when he was killed by the collapse, is being sent back to his native Albania. Kurtij had come to the State to work and send money back to his ailing parents. And yesterday, a wake was held in Staten Island for crane operator Donald Leo. Leo was three weeks from getting married.

#331 East 91st Street
#crane
#crane collapse
#department of buildings
#upper east side
#Upper East Side crane collapse
Do you know the scoop? Comment below or Send us a Tip