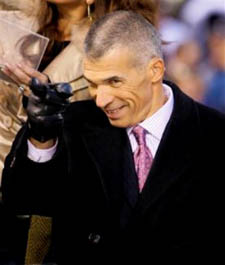 The Yankees just won’t go quietly into the offseason. Last night controversy erupted between Joe Girardi and the press corps over the status of Mariano Rivera, who had left the team yesterday to return to New York for a checkup. Girardi insisted it was just a end of year physical while Brian Cashman told the press Mariano had felt something in his shoulder and was having a MRI. The press conference included Girardi banging his fist on his desk and telling the media they could stare at him if they wanted to.

Needless to say, the media is not taking this well, some are accusing Girardi of lying, some are being more diplomatic. This issue has been simmering all season as Girardi has the tendency to tell reporters that injuries are no big deal and then they find out differently from the athlete himself.

It is certainly not Joe’s job to make the press like him, but outright lies to them are a bad way to operate. He might want to take a page out of Tom Coughlin’s playbook and work on his media relations this offseason. For now, the biggest concern is about the health of Mo and whether or not he will need surgery on his shoulder.