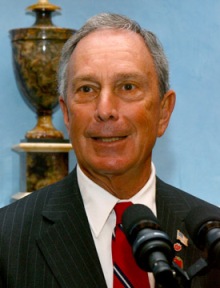 Since it's been about two months since Mayor Bloomberg said, "I’m not seeking a third term," it's time for third term rumors to pop up again. Today, the NY Times reports the billionaire mayor is considering another run as Mayor or maybe doing something in Albany.

A Bloomberg-commissioned poll found respondents do like Bloomberg BUT they don't want term limits lifted - what a conundrum! But they "were receptive to the idea of a Bloomberg candidacy for governor." Hmm - he'll get to battle it out with Sheldon Silver on a regular basis then!

While the Bloomberg-in-Albany concept was revived when the governor was Eliot Spitzer, things are a little sticky given that, per a former Bloomberg political adviser, "the mayor likes David Paterson." The adviser explained the poll is a tool Bloomberg uses to gauge public opinion and he "had his advisers throw in the question about term limits and a run for governor."

Where does this leave our grumpy and touchy lame duck mayor? Well, since he ruled out running for president, apparently he's said to be interested in being Treasury Secretary or president of the World Bank.

#2009
#mayor bloomberg
#michael bloomberg
#politics
#rumors
#term limits
#third term
Do you know the scoop? Comment below or Send us a Tip