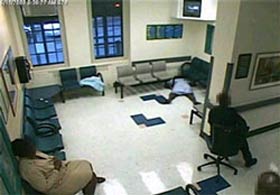 The City Medical Examiner released the results of Esmin Green's autopsy; and King's County Hospital treatment, or lack thereof, of the dead woman may have had more to do with her death than callous neglect. The M.E. found that Green collapsed after blood clots that formed in her legs as she sat in the hospital's psychiatric ward waiting room migrated to her lungs and killed her.

Green was seated in the reception area, waiting to be seen for approximately 24 hours before she collapsed. Hospital personnel walked past her without offering assistance for an hour before someone checked her condition.

The lawyer for Green's family, which is suing the hospital for $25 million, claimed that if an anti-coagulation drug had been administered as the patient was suffering convulsions on the floor of the waiting room as indifferent hospital employees walked past her, the 49-year-old woman could have survived. Green suffered from paranoid schizophrenia, the illness that brought her to Kings County Hospital in the first place.

Deep vein thrombosis is a condition that sometimes strikes people who sit in stationary positions for long periods of time. It is often associated with airline passengers, but in 2003 it caused the death of embedded NBC news correspondent David Bloom in Iraq.

#autopsy
#blood clots
#esmin green
#kings county hospital
#lawsuit
#Medical Examiner
Do you know the scoop? Comment below or Send us a Tip
A new Gothamist is coming! We’ve moved comments over to our beta site. Click here to join the conversation and get a preview of our new website.