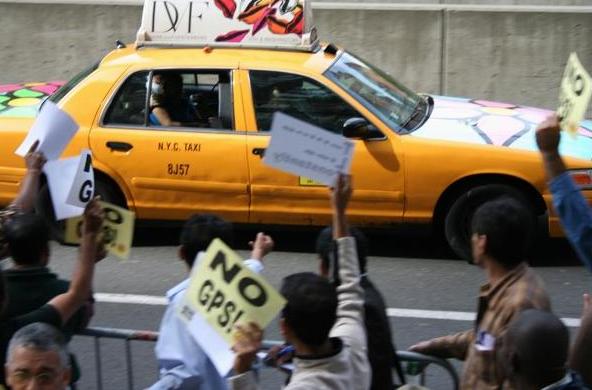 The second taxi strike ended this morning at 5AM and most of the reaction was either that it didn't even seem like there was a strike, what with all the cabs on the road, or that it was a rip-off. Thanks to the zoned-pricing contingency plan the city put into place, drivers were allowed to charge a lot more and pick up more fares. One person told WCBS 2 it was really a "taxi hike": "I wanted go three blocks down the block, a regular $5 cab ride. He wanted a flat rate of $50. I got out of the cab and walked."

There was a good explanation why there were many drivers out on the streets, rather than picketing. Colgate professor Graham Hodges, who wrote Taxi! A Social History of the New York City Cabdriver, spoke to Clyde Haberman and equated the contingency fare to a "bribe," “The people who do this job are desperate...you don’t have to be a Marxist to understand that that will breed strikebreakers.”

Chantal Fleischfresser has an audio slideshow of the demonstration outside the Taxi & Limousine Commission. Striking drivers are upset that GPS is being installed, as well as demanding that healthcare and retirement pensions are created and that the union be recognized. One of the drivers told her, "I can't believe for two or three hundred extra dollars that you would sell yourself like that. Bloomberg today offers you two or three hundred dollars to break our strike - what is he giving you 20 years from now when he's retired from his presidency and you have no pension or benefits?"