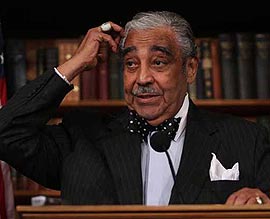 Just days after Representative Charles Rangel was allowed to keep his chairmanship of the House Ways and Means Committee, the NY Post reports on another possible headache for the Harlem Congressman.

Rangel and his wife owned the D.C. house between 1971 and 2000. They started renting three rent-stabilized apartments at Lenox Terrace in Harlem in 1988. A National Taxpayers Union spokeswoman tells the Post, "If a member of Congress maintains his or her principal residence in the state they represent, they would not qualify for the homestead exemption," while a Manhattan real estate attorney says, "If the [rent-stabilized] apartment in New York is not your primary residence, the landlord has the right to bring a court proceeding to have you evicted."

Rangel's office said they have asked Rangel's accountant to confirm whether he really did receive the D.C. homestead exemption. That accountant is either the worst or best accountant ever! Rangel has come under fire in recent months after it turned out he had four rent-stabilized apartments (he later gave one up) and didn't report rental income on a vacation villa.

#charles rangel
#rent stabilization
#Representative Charles Rangel
#tax
#tax break
Do you know the scoop? Comment below or Send us a Tip