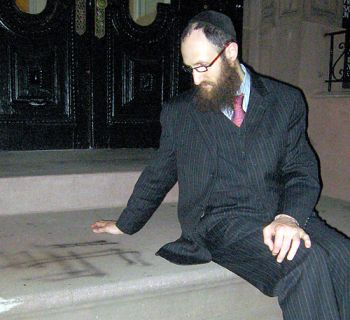 Yesterday morning a painted swastika was found at 800 Bedford Avenue (between Park and Flushing) in Williamsburg, it was one of five that were discovered on that block, and one of many discovered in recent weeks.

The Yeshiva World notes that the last known incident involving swastikas in Williamsburg occurred just this past week, an hour prior to a similar incident in Crown Heights. Independent of that, we received notice of two other swastikas found painted on a residential window and office door (both in Brooklyn) that same week. An increase in this particular type of hate crime may have to do with the upcoming Jewish holiday, Passover (April 19th to 27this, this year).

Council member Bill de Blasio commented on yesterday's discovery, the second of its kind this week, saying: "I am disgusted that hate crimes such as these have become so prevalent throughout Brooklyn. It's appalling that in 2008 we are still seeing this type of repulsive behavior. Intolerance, whether it comes to the Jewish community or any other group, is not acceptable. I will continue to work with the police to do everything possible to find out who is responsible for this and put an end to this disturbing pattern of hateful acts."

The NYPD's Hate Crime Task Force is investigating the latest incidents. Community members and elected officials have also been taking a stand, as some gathered at Brooklyn Borough Hall last week to denounce hate crimes and sign a "Statement Against Hate."

Photo via The Brooklyn Paper.

#anti semitism
#brooklyn
#hate crime
#passover
#swastikas
#williamsburg
Do you know the scoop? Comment below or Send us a Tip