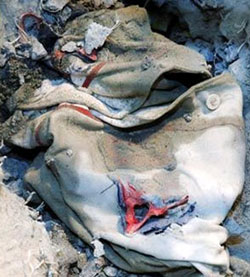 Baseball is full of superstitions. Some pitchers don't step on the foul lines. Some announcers don't say the phrase "no-hitter" or "perfect game" while a pitcher is working on them. And some rogue construction workers just keep on burying Red Sox artifacts in the new Yankee Stadium. The same guy who buried the (fake) David Ortiz jersey now says he buried an official scorecard from the 2004 American League Championship Series, the best-of-seven playoff round in which the Red Sox rallied from a 3-0 deficit.

After all the attention paid the Ortiz jersey -- the Yankees dug it up with great fanfare -- why wouldn't Gino Castignoli bury something else there? But he allegedly did this last summer, well before the Ortiz jersey nonsense got press attention.

If the Yankees keep reacting to stories like this one, they'll keep getting reactions. They should treat Castignoli like a child trying to attract attention in the backseat of a car: ignore him and he'll probably go away. Also, how much time is this guy spending burying stuff and how much time is he spending on true construction? As for the Yankees, they should just forget about it. Besides, Castignoli isn't saying where he buried the scorecard and it's probably really hard to find a piece of paper in concrete.

#baseball
#curses
#new Yankee Stadium
#red sox
#sports
#yankee stadium
#Yankees
Do you know the scoop? Comment below or Send us a Tip