We knew Mayor Bloomberg was looking to leave a big mark on Midtown before he leaves office, but damn, he's really going big! Yesterday the city unveiled its long-discussed rezoning plans for the Midtown East area around Grand Central and it is massive. Like, potentially adding another Empire State Building to the skyline massive. Possibly even two or three of them!

The goal of the plan, which the city finally showed off at a Community Board meeting last night, is basically to bring the aging building stock in the area into the modern age while hopefully bringing some more destination architecture to the city at the same time. How big an area are we talking about? The plan includes parts of 74 city blocks in an area that reaches from 39th Street up to 57th Street around Grand Central.

There are lots of rules in play (and it needs City Council approval), but if it passes, in some areas developers will be allowed to build 60% more space than what's allowed under today's zoning. And they could do so without a lengthy approval process. The closer you are to Grand Central, the bigger you'd be able to build without worries:

For example, on certain sites near Grand Central developers could build towers roughly the size of the 51-story 1 Bryant Park, at 42nd Street and Sixth Avenue under the proposed rezoning. On parts of Park Avenue, they could build towers about the size of Goldman Sachs's new 43-story headquarters at 200 West St., in the Financial District. 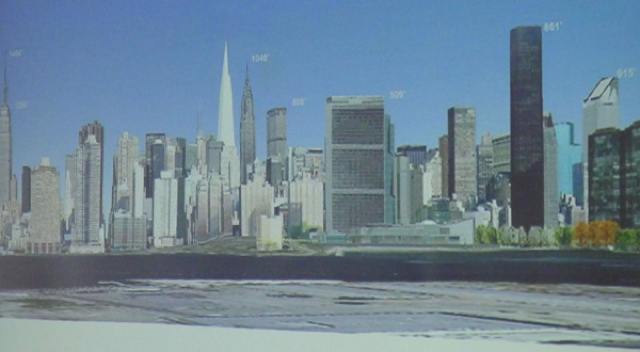 And if you are okay with going through a public approval process? Well, you can go even higher! Like, Empire State Building high. But your building better be damn good looking:

To achieve this, a developer must submit to a special permit, requiring the standard (and often torturous) public reviews. There would be a considerable emphasis on quality design, both at the top of the building, which would almost certainly take a prominent place on the skyline, as well as at the base, where “a significant public space” would be required, as Edith Hsu-Chen, director of the Department of City Planning’s Manhattan office, put it.

And developers will have to pay for the privilege of going up, up, up:

For a boost ranging from 25 to 100 percent of the current zoning, developers would have to buy their air rights either from local landmarks or a city-sponsored Development Investment Bonus. The numbers are still far from final on this, but the project would hope to generate many millions of dollars to fund improvements to the streets and subways.

Projects that money would fund include the already controversial idea of making Vanderbilt Avenue a pedestrian plaza—which the area would definitely need if they crammed a bunch more workers in there.

Though the Bloomberg administration clearly wants this to get started before the mayor leaves office (and as fans of tall buildings we'd like to see it happen), they are being careful about the timing. How so? To the point of considering having the plan not kick in for five years so as not "to create competition for the city's ambitious Hudson Yards project on the Far West Side, where developers are still seeking anchor tenants to help get large office towers off the ground."

Another reason to go slow is to keep the NIMBYs calm. Because you know that there is about to be a chorus of complaints from people whose view of the Chrysler Building is now being threatened.

#ambition
#DOB
#legacy
#manhattan
#mayor bloomberg
#midtown
#midtown east
#rezoning
#Upzoning
Do you know the scoop? Comment below or Send us a Tip