Tuesday night's severe thunderstorms resulted in the deaths of at least four people across the northeast. Two people were fatally struck by falling trees in Connecticut; two others were fatally struck by trees in Newburgh, in Orange County, where an 11-year-old girl died after a tree fell on her outside her home, ABC 7 reports.

Also in Connecticut, a teenager was seriously injured on a baseball field in Danbury when the roof of a dugout was ripped off by the wind and struck the boy. Wind speeds in Danbury were measured at over 70 mph at times during the storm.

"It's not verified whether there was tornadic activity, but it was about as close to tornadic activity in a very heavily populated area as you can get," Danbury mayor Mark Boughton told local news station WTNH.

The thunderstorms brought dangerously high winds, hail, lightning and flash flooding to parts of the northeast region early yesterday evening, downing trees and knocking out power—an estimated 100,000 Connecticut residents lost power due to the storm. In New York, Governor Andrew Cuomo issued a state of emergency for parts of the state.

I’m declaring a State of Emergency in Putnam, Dutchess, Orange and Sullivan counties as they recover from severe thunderstorms, and deploying members of the New York National Guard to assist with recovery operations.

Metro-North temporarily suspended service along the on the Harlem Line, Hudson Line and New Haven Line at the height of the evening rush, due to downed trees on the tracks. Crowding in Grand Central Terminal was so extreme that the NYPD shut the doors for a period of time, and scenes of nightmarish overcrowding were documented in the Times Square subway station, with delays on multiple subway lines. Metro-North service resumed in the late evening, though some service changes continued today north of the city due to downed trees.

High winds toppled scaffolding outside buildings around the city and even appeared to rip a water tank off a roof in Harlem.

The FDNY could not confirm any injuries directly resulting from the storm, and so far there were no reports of any fatalities in NYC. But in parts of Brooklyn, residents emerged from the storm to find their cars destroyed by fallen trees. 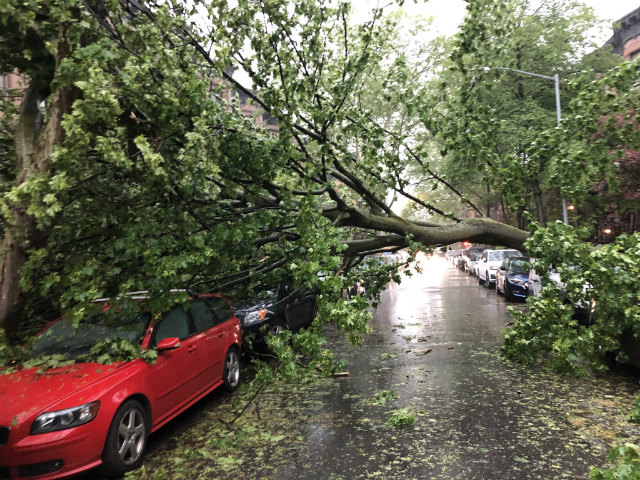