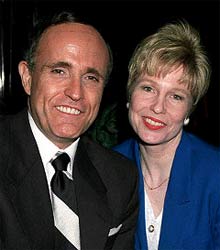 Okay, so we've heard about how Rudy Giuliani's mayoral administration billed his police security detail expenses - accrued during trips to the Hamptons, possibly visiting then-mistress Judi Nathan - to various obscure city agencies. And then there are reports that Nathan, now married to the former mayor, used her NYPD security detail to chauffeur friends and family. Naturally, now there's talk of the police security expenses of Giuliani's then-wife Donna Hanover.

The Post's David Seifman points out that Hanover's travels "cost tax payers a lot more" than Giuliani's jaunts to see Nathan. Hanover apparently traveled to California a number of times during their separation:

In June 2000 - a month after Giuliani shocked the city by unexpectedly announcing his separation from Hanover at a routine press event in Bryant Park - his jilted wife headed west every weekend.

The June trips alone cost taxpayers a total of $27,721 in security expenses.

A six-day trip in November 2000, when Hanover brought daughter Caroline Giuliani to Los Angeles, required the services of six cops who put $19,065.27 on their city-supplied American Express cards.

The NYPD security details also made sure to charge the fees for luggage carts on their expense reports, too. Still, we think security for the wife and family of the mayor is a legitimate expense - who wouldn't want to get away from the husband that broke the news of their separation during a press conference? And it's nothing like the mayor's mistress having NYPD detectives walk her dog.

Neither Judi nor Rudy will discuss when they exactly met, but it's believed they met in the first half of 1999. And Talking Points Memo calls the money for Nathan-related expenses the Shag Fund.