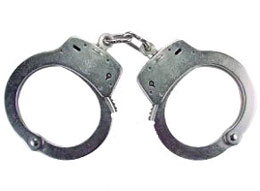 There are new details surrounding Sunday's 208 arrests at the Puerto Rican Day Parade: According to the NY Times, the police still claim that people were arrested for "specific illegal behavior," like blocking traffic, and not because they were wearing colors of the Latin Kings gang. However:

Criminal complaints filed against 10 defendants show that the police were concerned about the risk that those arrested would engage in violent or threatening behavior or cause some public inconvenience.

The complaints also indicate that the police were looking for signs of gang identification, like clothing colors and hand signals, when they arrested people.

So, is it a mini-broken windows approach at a parade - block traffic, and you might engage in violent behavior? While pushing and blocking pedestrian traffic is certainly illegal, it's a crowded parade, so there's bound to be a lot of pushing. NY1 filmed some of the arrests and confrontations between parade-goers and police, one which "police say they stepped in to help a woman who said she was being sexually abused."

The NYCLU suggested that the parade arrests could have included innocent people, much like the the Republican National conventions arrests as well as the arrests of 30 youths on their way to the wake of a friend in Bushwick. The NYPD denied it, saying, "There were no pre-emptive arrests made at the Republican National Convention, none made in Bushwick, and there were none made here."

There's also some confusion about how many people were arrested at last year's parade. Yesterday, the Times reported that around 50-60 were arrested, making this year's 208 arrests a huge increase. But the NYPD now says over 150 were arrested last year. Though the Manhattan DA's office only knew of 64 arrests in 2006, the NYPD's explanation is that 87 other people were processed at precincts, not police headquarters.