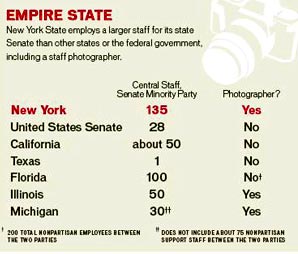 The NY State Legislature has long been considered the most dysfunctional state government in the country, and NY Sun has a great article giving weight to that statement: "The Empire State's Legislature employs more people than any other state legislature in the nation." Well, all that dysfunction has to be enabled from someone - or many someones!

According to the most recent data from the National Conference of State Legislatures, the NY State Assembly and Senate had 3,428 staffers, which, the Sun points out, is 500 more than Pennsylvania (2nd biggest staff) and is "more than 45% more than either California or Texas, the two most populous states in the union."

Of course, why the Senate minority would needs it own photographer is another issue. The California State Senate minority spokesman tells the Sun, "We have one camera that we throw to one another as events come up. Generally, it's whoever is available to take pictures."

And here's a summary of why the State Legislature is so damn dysfunctional.