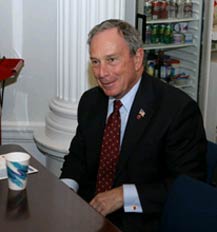 What a different five years makes: The NY Times shares some interesting data on how Mayor Bloomberg has convinced low-earning New Yorkers he cares about them.

It's unclear how he's made it happen, since he sometimes, notably doesn't seem to exhibit empathy, though maybe that's what people like--some people tells the Times they like his "attitude" (no nonsense?). Others say he's doing a lot for education (though it's unclear whether those gains really exist). And they don't even mind that he's got many, many billions! Columbia University historian Alan Brinkley said, "He almost seems not to care very much about what people think of him, which in a way is admirable. I would not say that about Bloomberg now although I still think he does not behave like a typical, ingratiating politician. In many ways, that may be a reason for his great success.”