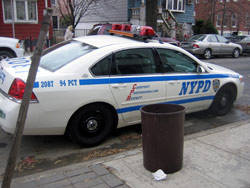 Miss Heather has a sigh-inducing story of police harassment on her site this week indicating that police still do not understand that taking pictures in public is not against the law. Or maybe they do know it's not against the law, but it'll still earn one detainment and a grilling. Was Miss Heather taking pictures of chemical facilities, rail junctions, bridges, or tunnels? No, she was taking shots of neighborhood Christmas decorations in Greenpoint, Brooklyn.

P.O.: If you live in north Greenpoint, what are you doing here?
Me: Taking pictures, is that against the law?
P.O.: No.
Me: Hausman Street always goes all-out with their Christmas decorations, I just got done taking pictures of them. Pretty days like today are going to become few and far between soon and I wanted to enjoy them while I can.

Barney Fife looked at me like I had eight heads.

Allegedly, someone called the police to report a suspicious character taking pictures on his or her block. We suppose a young woman in a Sanrio character hat taking pictures in broad daylight could be considered a possible cat burglar (a Miss Kitty burglar?) or something, casing the neighborhood.

For the record, public photography is very legal and even survived a proposed licensing scheme earlier this year that stemmed from a lawsuit a Columbia University grad student filed against the city after he was handcuffed and detained for taking pictures of the city.

(Photo of 94 Precinct police car by Miss Heather, at Newyorkshitty.com)