More on All the Sunday Night Harlem Shootings 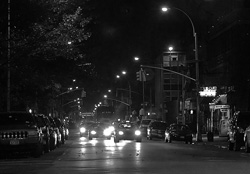 After a two-day delay, the mainstream dailies are finally reporting on Harlem's violent Sunday night, which saw police helicopters, plainclothes cops and myriad squad cars flooding the neighborhood in response to shootings that left six hospitalized. The incidents occurred after the African American Day Parade. According to Cop in the Hood, "The parade ended in the afternoon. The tough kids come out at night. Between 11 p.m. and 2 a.m., people were walking around with guns, shooting them in the air. And this right by uniformed officers. Plain-clothed officers would tackle the kids."

The Daily News reports that police arrested over 16 people for criminal possession of a weapon and seized 14 illegal firearms, but none of those arrested were believed to be involved in the shootings, which mostly took place near the end of the parade route. Seven others were charged with assaulting police officers. In the past two years, shootings in the area that resulted in injuries or death are up 86%, and this summer was particularly bullet-ridden. Luther Smith, a Harlem-based political consultant, tells the News "there is a crisis going on in terms of young people having access to weapons. I don't think it reflects on Harlem per se as much as the state of young people."

But why the lag in mainstream coverage? Cop in the Hood notes that "some feel the media (and most white folk) simply doesn't care about black-on-black crime and what goes on in Harlem." NYC the Blog points us to another perspective on the media's initial indifference: "Because of all the gentrification going on. Can't scare all the white people..." (Heh, who's scared?) Below, a shaky video of the gunplay and police action shot from a Harlem roof Sunday night. Warning: NSFWhite Gentrifiers!