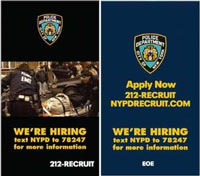 The NYPD's recruiting woes appear to be continuing through 2008, with a sharp drop-off in the number of candidates applying to sit for the Police Officer Exam, which is the first step to qualifying to enter the Police Academy. According to the New York Post, the number of test takers is down 20% from number of people who took the exam at the same time last year. "Slightly fewer than 20,000 have applied for the Feb. 23 test, down from the roughly 25,000 who filed last year. In October 2004, more than 35,000 registered for the test."

The decline is not for lack of trying either. The NYPD has been casting its net far and wide in search of recruits. The department has started to hold exams in upstate cities like Albany, Buffalo, and Syracuse, and has been recruiting at upstate colleges. To qualify to take the exam, one must have earned 60 college credits or completed two years of active military service.

Getting recruits and then shepherding them into the Academy is just the beginning of the department's problems. Of last year's class of 1,000, 14% of the recruits dropped out before becoming full-fledged police. Among the force at large, the New York Post reported in late 2006 that most cops don't seem to be aspiring to advance in the ranks, rather preferring to remain police officers. The number of eligible cops who are willing to take the sergeant's exam has been declining for years. Some observers feared that it indicated a lack of commitment to the job.