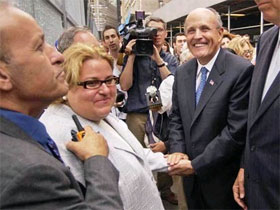 More details about Tania Head's life have come to light ever since the NY Times published its article about her. Head rose to a certain kind of prominence as a survivor of the September 11 attacks at the World Trade Center, claiming to have been on the 78th floor of the WTC when the planes hit and that her fiance also died at the WTC. She became president of a 9/11 survivors group, trying to forward their causes, giving tours at Ground Zero and told one victim's family members how their son saved her. But then the Times found out that pieces of her story didn't add up.

After the Times article, La Vanguardia, a Barcelona newspaper, reported Head had attended a Barcelona MBA program a week after the September 11 attacks, telling classmates her scars were from a "high-speed crash in a Ferrari" - scars she later told people were from the WTC attacks.
One of Head's classmates told the Post that Head was partying on Costa Brava during the attacks. And a person she was allegedly working with in Thailand following the 2004 southeast asian tsunami had no recollection of her. While Head became the head of the World Trade Center Survivors' Network, a position she was stripped of last month, there's no indication that she ever took any funds from the organization.