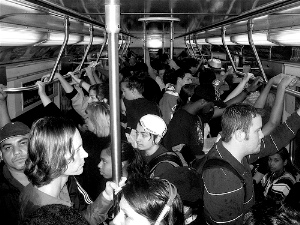 Looks like complaining about crowded trains on the MTA's Rider Report Cards works - the MTA announced it will increase service on the 7 and L subway lines.

The 7 line will have more trains running during the morning rush hour between Flushing-Main Street and Times Square, by extending rush hour service 25 minutes (new: 7:10-9:05AM; previously it was 7:20-8:50AM). Between 8:30PM and 10PM, Main Street-bound trains will operate every 4-5 minutes, versus the current every-6-minutes. Overall, there will be 10 more round trips each week day.

The increased service will begin in December, at a cost of $2.6 million. In other subway news, some transit advocates and politicians are trying to stop the fare hike.

Photograph of a crowded morning L train by i'mnotsayin' on Flickr