More Fare Hikes for Less Service is the Future 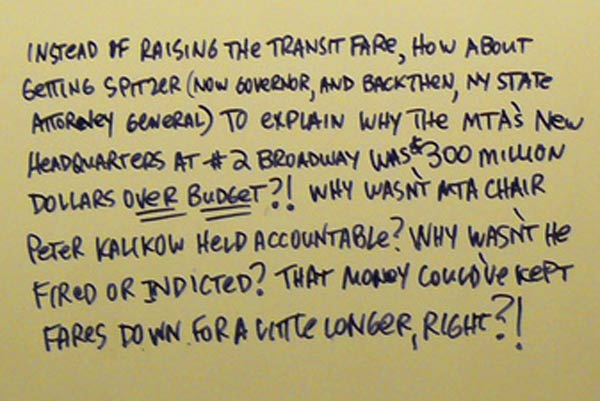 The MTA's favorite tune is unfortunately recorded on a broken record that keeps repeating itself: commuters need to pay more, but don't expect to see much in the way of improvements for it. The agency is saying that given the huge budget shortfall projected for next year, it's already contemplating another fare hike just three months after the last one went into effect. It would be nice if the next fare hike didn't leave odd amounts of unusable change stranded on Metrocards.

Mayor Bloomberg poor-mouthed the City as a reason for a potential hike, and in no small part blamed the defeat of his congestion pricing plan as the reason for the knife the MTA is planning to introduce into commuters' backs. "I think there is a very good likelihood that we are going to have to face the issue of a fare increase or something else. The city doesn't have any money to give. We are out of money."

And all those capital spending projects that the MTA was planning are likely being placed on the back burner. If one has purchased a "2nd Ave. Subway 2013!" t-shirt in recent months, hang on to it, so you can give it to your still-a-glimmer kids, and they can wear it ironically when they're in their 20s and turn into hipsters living in New York City.

For more current irony, it thus appears that the defeat of congestion pricing as a way to reduce car congestion in the city will lead to higher mass transit fares, thus discouraging even more people to make the choice against single-car commuting into the city.