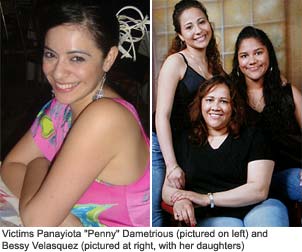 The driver suspected of DWI when he crashed his Range Rover into a livery cab, killing the driver and passenger, actually faces murder charges from a 2006 incident.

WCBS 2 reports that Daryush Omar's blood alcohol level was twice the legal limit. Police say Omar, who is charged with charges of drunken driving, criminally-negligent homicide, and driving with a suspended license, ran through a red light on 31st Avenue in Astoria and t-boned a livery cab driven by Bessy Velasquez.

Velasquez and passenger Panayiota "Penny" Dametrious, a clinical psychologist, died from their injuries. One witness told the NY Times, “The driver’s side door was completely smashed in. I didn’t approach the car because I wanted to be able to sleep later. But I could see long hair, and they weren’t moving.”

Newsday reports, "Omar was already slated to appear in Manhattan Criminal Court on Dec. 12, to face second-degree murder charges and first-degree robbery charges in the May 2006 beating death of Thomas Whitney." Apparently Whitney, 24, had asked Omar for directions, but Omar, who was on his cellphone, "became incensed and, news accounts said, told five friends who were with him to 'Get the white -- '" and Whitney was kicked and beaten (with a steel pipe) to death.

Whitney's wallet was also stolen, and a few days later, Omar's friends were caught on video using Whitney's credit card. According to the Daily News, "Omar was freed pending trial... A law enforcement source said the case had been postponed because prosecutors have not found witnesses to the crime." Whitney's father said, "I knew it was coming. He is a thug. A common thug," and added, "My heart and prayers go out for the two women who were killed." 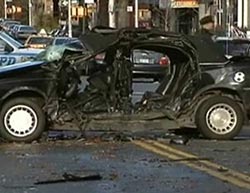 Vesaquez worked for Myrtle Car Service in Brooklyn; her daughter said, "I just want you to know that I lost one of the greatest persons in my life, me and my sister. It's really hard for us because our mom was always there for us and now we don't have her because someone was under the influence." And Dametrious, originally from Cyprus, worked at Brookdale Hospital and was studying child psychology in Pace's doctoral program. Her friends, who described her as "wonderful," say Dametrious was preparing to defend her dissertation.

And in a sick footnote, Evangelos Fotiou was arrested for governmental obstruction: The NY Times reports he "came across the scene of the accident and took money from one of the victims." A police source told the News, "This is human behavior at its worst. Two innocent lives were claimed by a man who already killed someone, and then a thug tried to take their money."