More Details About Fossella's Affair as GOP Looks for Other Options 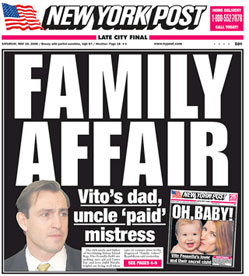 After his DWI arrest led to admitting an affair and a 3-year-old love child in Virginia, Representative Vito Fossella returned to Staten Island to rampant speculation of his imminent resignation.

Not only has the media predicted a resignation could come soon, the Advance reports House GOP leader Rep. John Boehner and Republican National Campaign Committee head Rep. Tom Cole have contacted Staten Island District Attorney Daniel Donovan to see if he's interested in the seat. Donovan acknowledged he's spoken to them, but said, "I have not put my name out there. As far as I know, we have a congressman in place, and I have no indication that he's not running."

The tabloids pick apart details of Fossella's relationship with Laura Fay, a retired Air Force lieutenant colonel he met while she was a House military liaison. Fay sparked the press' interest when it was revealed she picked up Fossella from the Alexandria, VA police station. The Post reports a Republican source as saying Fossella's father and uncle "were bankrolling the kid." 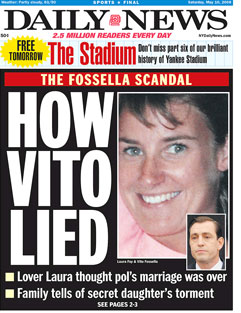 The Daily News spoke to a source with this bombshell, "Fay thought - up until the release of the [Thursday] statement - that Fossella was separated" from his wife Mary Pat. The source added that Mary Pat, the mother of Fossella's three children, is "mad"-- "I think she may have had a clue that he had a roving eye, but I don't think she had a clue that he had another child."

It's unclear whether Mary Pat Fossella, who was previously bank executive, will divorce Fossella, but one friend told the Post, "She was unhappy for a really long time and maybe this will be the push that she needed." And on the other side, Laura Fay's relatives had no idea that a Congressman fathered Fay's daughter Nathalie. An aunt said, "Some day [Nathalie]'s going to know about it, and it's very sad. It's just sad."

The NY Times looks at Fossella's political career, establishing "himself as a reliable member" of the Republican party in Congress: "He voted to impeach President Clinton, followed President Bush’s war policies in Iraq, voted to eliminate financing for Planned Parenthood and supported a constitutional amendment against gay marriage."

Last month, Fossella joined other Republican lawmakers in demanding that Bill Maher apologize for remarks about the Catholic Church. Maher had said the church was a “a child-abusing religious cult” and “that’s what the Catholic Church is, the Bear Stearns of organized pedophilia.” The lawmakers criticized Maher for "insulting the Pope, mocking the Catholic religion and Catholics and diminishing the importance of the Catholic faith."