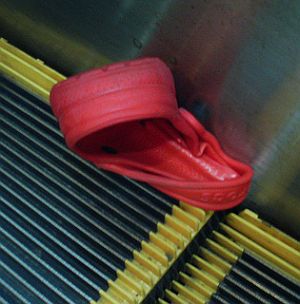 A 7-year-old New York City boy has joined a growing number of children who’ve had the horrifying experience of getting their feet mangled by escalators while wearing popular plastic clogs made by Crocs. The boy’s mother says the accident happened in a Kentucky airport:

”All of a sudden I hear this excruciating screaming from Nicky and I turn around and his little foot is being sucked into the side of the escalator. It's just like chewing up his foot.”

Nicky recalls: "I was very nervous and I thought I was going to die. My foot was in the side and she just yanked it out for some miracle and it worked."

Nervous! What a trouper; blind panic and mortal terror would seem more appropriate reactions. The boy’s mother has now contacted escalator-chasing lawyer Andrew Laskin, who is suing Crocs on behalf of a Westchester 3-year-old (and her parents) who sustained “severe and permanent” injuries when a JFK airport escalator devoured her Croc-clad foot.

Laskin is seeking $7 million from Crocs, who still refuses to put a warning label on their product, despite widespread reports of similar accidents. He tells WCBS 2 that “If there's a foot in the shoe and it sticks, the rest of the body goes down the escalator and that foot that sticks get sucked into the mechanism of the escalator.”

But just a moment, Moms and Dads: Before you rush to burn all the Crocs in your house, consider donating them to the needy in less advanced countries (where escalators are still just a myth) through the Crocs SolesUnited initiative. And the Crocs FAQ does not mention anything about escalators and Crocs, though it does answer the question, "Can I boil and then eat my Crocs shoes?"

Photo of Crocs clog stuck in escalator by Stephen Wong.